Every two hours, a hedgehog was admitted to an RSPCA wildlife centre in October

Hedgehogs admissions into the RSPCA are breaking records this year, with numbers showing a five-year high for the period from January to October. 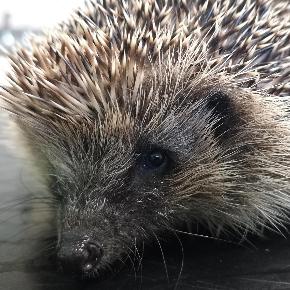 Admissions for this September and October are the highest they have been for the last five years.  Last month (October), an average of twelve hedgehogs were admitted into the RSPCA’s specialist centres every day - equivalent to one every two hours. There have already been more than 200 admissions this month so far (November).

RSPCA Scientific Officer Evie Button says:  “It’s going to be a difficult year for hedgehogs. As we head towards the hibernation period, we’re seeing a surge in hedgehogs being brought to our centres by concerned members of the public and the RSPCA’s own officers.  We could be in for a record-breaking year.

“While it's impossible to know exactly why we are seeing so many more hedgehogs this year, some potential causes could be if they’re having trouble finding food this year, changes in weather that affected the timing of the breeding season, or even that people are more aware and concerned about hedgehogs so are reporting them to us more often.”

Every autumn, in the run-up to hedgehog hibernation time, the animal charity sees a flood of these iconic wild animals brought into its centres.  Hedgehogs are by far the most common species admitted to RSPCA wildlife centres across October and November and there are currently a total of 461 being cared for at East Winch, Norfolk (224), West Hatch, Somerset (128), Stapeley Grange, Cheshire (92) and Mallydams Wood, East Sussex (17) .

But it’s not easy to tell if a hedgehog is in trouble, so from time to time, perfectly healthy hedgehogs are brought into wildlife centres by well-meaning members of the public.

To help animal lovers make a more informed decision, the RSPCA has introduced simple guidance based on fruit sizes to help the public gauge whether a hedgehog is underweight and needs specialist care (if the hedgehog if mango- or apple-sized) or big enough to survive hibernation (pineapple-sized).

Evie continued:  “It’s important to ensure that our scarce resources are targeted at the animals most in need, but it can be quite tricky to tell whether a hedgehog really needs help or not.  Using fruit sizes as a guide is a useful way of working out whether the animal’s healthy or in trouble.

“If the hog is mango-sized or even smaller, it needs to be taken to a rescue centre.  At this size, the hedgehog will probably weigh less than 450g and is unlikely to survive the winter without expert care.  But if it’s the size of a pineapple, there’s no need to worry. That hedgehog will have reached a very healthy weight and can be left in peace to carry on with its preparations for hibernation.”

Hedgehogs need considerable fat reserves to get them through the winter.  As autumn turns to winter, prey such as insects become much more scarce, and that can prevent young hedgehogs reaching an appropriate weight of 500g or more so they can hibernate safely.

While September sees the tail end of the orphaned hedgehog admissions, by October, the balance tips towards those that are found out during the day looking for food or that are starving. These animals may also be orphans which are now struggling as they were not able to put on as much weight without their mother’s help.. However you may also see hedgehogs out and about during winter when the weather is mild, as they will often wake up during hibernation to forage for food or move their nest sites.

Anyone with concerns about a wild animal’s welfare can contact the RSPCA advice line 0300 123 4999. For more information about how to help hedgehogs in your garden, visit the RSPCA’s website: https://www.rspca.org.uk/adviceandwelfare/wildlife/inthewild/gardenhedgehogs