A silver fox has been admitted to an RSPCA wildlife centre after being found in a Cheshire garden.

The impressive-looking animal was roaming in a garden in Dunnocksfold Road, Alsager, shocking the homeowner. Thankfully a former RSPCA inspector who lived nearby had the equipment and the knowledge to safely catch the animal, which was then taken to the charity’s Stapeley Grange Wildlife Centre in nearby Nantwich.

Amanda Lovett, who worked for the charity before setting up Alsager-based cattery Mere Moggies Boarding, said: “I was alerted to a post on a local Facebook group and it would seem the fox had been in the garden for most of the day. This was on Saturday, one of the biggest nights for fireworks, and we knew we had to get the fox to safety. 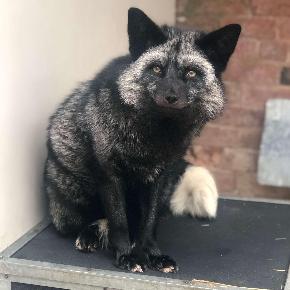 Stapeley Grange, who kindly stayed open later so he could be admitted.

“He was very quiet and seemed tame.”

The fox, which has no microchip, has been nicknamed Shadow by staff at Stapeley Grange. He is currently being looked after by staff there while his owners are traced.

Lee Stewart, manager of Stapeley Grange, said: “It is likely that Shadow has been kept as a pet and he has either escaped, in which case we need to find his owners, or he has been dumped by his owners.

“He was checked over by our team of vets and was found to be in good health, just a little overweight. He is eating fine and seems to be doing well.

“He is the first silver fox we have ever had here at Stapeley Grange, in nearly 25 years we have been open. He is an impressive-looking animal and it has been interesting to us all to have such a rare admission.”

If no owner can be traced, Shadow will be looked to be rehomed with a specialist owner.

Silver foxes are the same species as the red foxes we have living wild in the UK but with different colouration. Silver foxes are bred for their fur but are now sometimes kept as ‘pets’.

The RSPCA advises anyone thinking of getting a pet to fully research the animal’s specific needs before making a decision. Exotic pets can live a long time, grow to a large size and need to be taken an exotics vet if they become ill, which can be expensive.

Foxes are wild animals with very specific needs no different to foxes living in the wild and they require specialist care. Even the most experienced fox experts have had difficulty keeping adult foxes successfully. Therefore, the RSPCA does not advise or condone keeping foxes as pets.

The RSPCA is a charity and relies on public donations to exist. It costs the centre £50,000 to feed the 6,500 animals which are admitted every year. Anyone who would like to support the vital work of Stapeley Grange can now donate online.