An RSPCA wildlife centre in Cheshire is reminding people about the dangers netting poses to wildlife after a fox had to be rescued from a goal net.

The animal welfare charity was called to rescue the fox from a garden in Wellington Road, Altrincham, in Cheshire. When the inspector arrived they found the animal tangled in football netting by her back legs.

They managed to untangle the animal but, noticing she had wounds to her legs, they took her to the RSPCA’s Stapeley Grange Wildlife Centre, in Cheshire.

“Thankfully her wounds were found to be superficial, so now we will keep an eye on her for the next 7-10 days with the hope that she will be released back into the wild,” said Lee Stewart, manager at Stapeley Grange.

“Sadly we do get a number of animals who come to us after getting tangled in netting, but all of this could be avoided if netting was correctly put away. Last year we had 162 animals come into 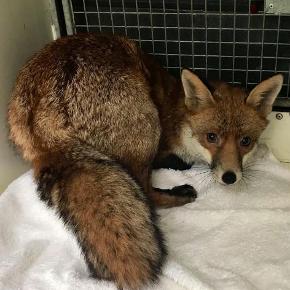 us as a result of netting.

“Some animals survive, but very sadly many animals suffer fatal injuries as a result of struggling to get free, or die from starvation or dehydration because they cannot escape.

“If they go unnoticed even for a short time, they can really suffer. The tight net can cut off the blood supply to their limbs, damage bones where they have tried to frantically escape, or worst of all, they could be strangled to death.

“There is one simple way to prevent this from happening - please remove nets after use and store them safely away or discard them safely.”

Forms of garden netting, like pond netting, can be a real hazard to wild animals like hedgehogs and the RSPCA recommend replacing them with solid metal mesh.

If you spot an animal which is trapped, in distress, or in need of help, contact the RSPCA’s 24-hour cruelty line on 0300 1234 999. For information, visit the RSPCA website at: www.rspca.org.uk/adviceandwelfare/litter.

The RSPCA is a charity and relies on public donations to exist. It costs the centre £50,000 to feed the 6,500 animals which are admitted every year. Anyone who would like to support the vital work of Stapeley Grange can now donate online at www.justgiving.com/campaigns/charity/rspcahq/stapeleygrange.

The centre produces a quarterly email newsletter updating supporters on animal patients and other activities at Stapeley Grange. To sign up please visit www.rspca.org.uk/stapeleynewsletter. You can also download the centre’s latest Winter newsletter on our website.