A pair of orphaned otters that have been in RSPCA care since last Christmas Eve have been released back to the wild - and this heartwarming video tracks their journey!

Mary and Joseph the otters were admitted into RSPCA care last December (2015) after they were found cold, hungry and alone during severe storms last winter. 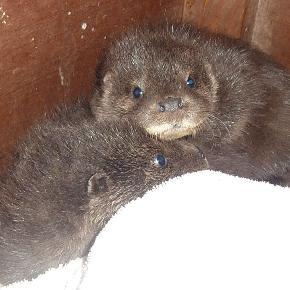 Over almost 12 months staff at RSPCA Stapeley Grange wildlife centre fed and closely monitored the pair in their new otter enclosure.  Now, one year on from being brought into the centre bedraggled, cold, hungry and lonely, the pair have been released back into the wild.

RSPCA Stapeley Grange manager Lee Stewart said: “These two have been in RSPCA care for almost a year - they came in to us on Christmas Eve as orphans during the storms in Rea Brook, Shrewsbury.

“We are very proud that they have been successfully released back to where they belong. Rehabilitating orphaned otters is a long and tricky task. We had to hand rear them - but without letting them get too used to human contact, it’s so important to keep them wild.”

The touching footage tracks Mary and Joseph from when they first came in to RSPCA care as tiny orphaned cubs, to being hand fed by staff and then eventually placed into a new otter enclosure ready for release back to the wild by the River Tern.

Lee added: “We always release otters gradually and we build enclosures for them on the banks of where they are to be released  We then give them  a couple of weeks so they become accustomed to the environment before releasing.

“It is so heart-warming to return an animal to the wild - but when you know just how much work has gone into looking after them, treating them, feeding them and keeping them alive it is all the more rewarding.”

You can watch Mary and Joseph’s journey here: https://youtu.be/RkaDIfDCn5Q

The RSPCA is a charity and relies on public donations to exist. Anyone who would like to support the vital work of Stapeley Grange can  text RSPCA2 to 70007 Texts cost £3 + standard network rate).

For more information on the RSPCA’s wildlife rehabilitation, release and post-release monitoring, visit our website at www.rspca.org.uk/whatwedo/care/rehabilitation/wildliferehabilitation