An otter cub separated from her mum during Storm Doris is recovering after being rescued by the RSPCA.

The young cub was found staggering at the side of a river in Ralph Road, Staveley, in 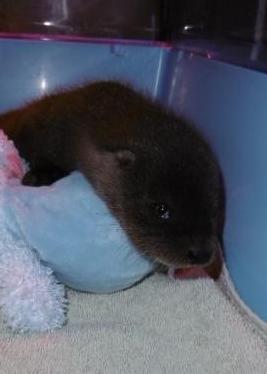 Chesterfield, on Wednesday night (22 February). RSPCA inspector Kristy Ludlam collected the otter and took her to a vets. She said: “She was found at the side of the river where she was lethargic, dragging her back legs and calling for her mum.

“I immediately took her to a vet, where her legs were found to be fine but she was suffering from a respiratory infection. She was kept in overnight and given antibiotics, fluids and food. Thankfully she seemed to be recovering well and she was transferred to our wildlife centre , Stapeley Grange, on Thursday.”

The otter - who has been named Daffi after daffodils (the first sign of Spring) - is now recovering at Stapeley Grange, in Nantwich, Cheshire, where staff are hand-feeding her six times a day.

Lee Stewart, manager at Stapeley Grange, said: “Daffi is very sweet and she is feeding well. At the moment she is being bottle fed Royal Canin milk formula six plus she is beginning to take small amounts of milk and squashed trout bits that we are leaving out for her.  When she has put on more weight we will be able to start feeding her fresh trout.

“She does seem to enjoy being fed and it is very cute watching her moving her paws while she is eating.

“We are monitoring Daffi closely since she arrived and she is doing well considering what she have been through.

“We have a second otter cub coming in from Northumberland, on top of the five we currently have in care. It costs around £3,000 to feed a pair of otter cubs over the course of the 12 months they are with us.”

If you would like to help Daffi and her otter friends with a donation of just £3, simply text RSPCA2 to 70007. Texts cost £3 + standard network rate.

Don't miss the very cute video of the otter being fed: https://youtu.be/Ku3LpXqUN_M