The seal, named Flax, is one of 11 currently at the wildlife centre

A seal pup who was covered in oil is recovering at an RSPCA wildlife centre in Cheshire after being rescued in Merseyside.

The grey seal was rescued by an RSPCA officer after getting trapped in an oil compound.

RSPCA animal collection officer (ACO) Lauren Bradshaw said: “He was found by one of the workers who was inspecting the site early on Wednesday. He heard something move on the gravel so shone his torch to try and find where the sound came from and that’s when he saw this seal.

“He was underweight so I immediately took him to our Stapeley Grange Wildlife Centre.”

Staff at the centre, in Nantwich, gave him a wash with Fairy washing liquid, which has been found 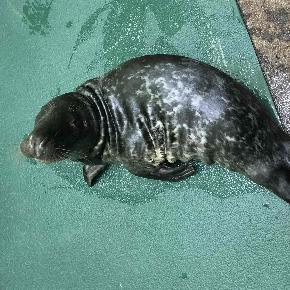 to be the best substance to remove oil from animals.

The seal, who has been named Flax by RSPCA staff, will now be monitored closely over the next few days. As he is just a small pup he will be tube-fed a rehydration solution four times a day initially to get him rehydrated. He will then be moved to a liquidised fish diet as soon as possible so that he can start to put on some weight. Eventually he will start to be tube fed fish until he is taking them on his own.

“Flax is currently in our isolation unit where he can be closely monitored,” said Lee Stewart, manager of Stapeley Grange.

“When he first came in it was important to clean the oil off him as early as possible, as the oil could burn the skin or he could ingest it from his fur.

“Now that he is all cleaned up, our main concern is to get him vet checked and rehydrated. It is clear he hadn’t eaten for at least a couple of days as he is really emaciated. Being so young he would have been totally dependent on his mum.”

Once Flax has gained enough weight he will be moved to one of Stapeley Grange’s pools, usually with another seal so they can socialise. 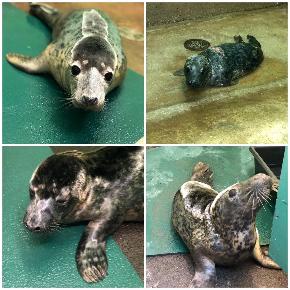 As Stapeley Grange doesn’t have facilities to see them through to release the seals are then transferred to RSPCA East Winch, in Norfolk, for 6-8 weeks where they are given access to larger pools where they can socialise and start to learn to compete for food with other orphaned pups.

After that it’s all about weight gain and as soon as they weigh over 40kg they are returned to the West coast of the country, via Stapeley, and released back to the wild.

“Their rehabilitation takes a long time as we need to be sure that they are the right weight and that they can compete for food and socialise with others, before going back to the wild,” said Lee. “It is hard work rehabilitating one seal but it is so rewarding when they are released back into the sea after months of looking after them.”

At the moment Stapeley Grange has 10 seals - including Flax. As a result, the centre is using 150kg of trout each week just to feed the seals  - at a cost of £280 a week.

The centre is urging people to help towards the cost by donating to its Funds For Foods campaign.

“It is a saying which is often used but every little does help,” said Lee. “When a seal arrives into our care, our food bill goes up and as a charity which relies on public donations, we really are very grateful for everyone who donates even just £1 which will go towards our annual £50,000 food bill.”

To donate to Stapeley Grange, visit www.justgiving.com/campaigns/charity/rspcahq/stapeleygrange. Alternatively donations can be dropped off to the centre, which is in London Road, Nantwich.

The RSPCA would urge anyone who has any concerns about a seal pup or seal to keep at a safe distance and contact our 24-hour emergency line on 0300 1234 999. For more information about what to do if you see a seal or pup on the beach alone, please visit the website: www.rspca.org.uk/adviceandwelfare/wildlife/orphanedanimals/sealpups

The centre produces a quarterly email newsletter which gives updates about animals in its care. To sign up, visit www.rspca.org.uk/stapeleynewsletter. You can also download our latest newsletter online at https://bit.ly/2QhIMAu.

Photos and a video of Flax being washed can be downloaded here: https://spaces.hightail.com/space/EwF7ATIc6V