Jackdaw suffered for two weeks after being shot in Cheshire village

A jackdaw which was rescued by the RSPCA was found to have been suffering for two weeks after being shot in his windpipe.

A member of the public contacted the animal welfare charity after spotting the bird struggling to fly in No Mans Heath, Cheshire.

An RSPCA officer collected the bird and as there were no obvious injuries, the bird was taken to the charity’s Stapeley Grange Wildlife Centre in Nantwich.

Vet Teresa Vicens-Prohens x-rayed the bird and found a pellet was lodged in the centre of his body. But the entry wound where the pellet entered the body had healed, indicating he had been shot approximately 14 days earlier.

Teresa said: “Sadly this meant that the jackdaw has likely been struggling to eat for two weeks and as a result he became weaker and weaker. Because of the location of the pellet he was also struggling to flap his wings and was unable to fly.” 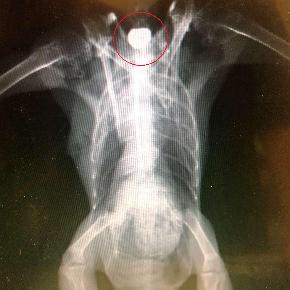 “It is very distressing to think that people take pleasure in causing harm to Britain’s wildlife,” added Teresa. “These are deliberate acts of cruelty and we would appeal to people’s consciences not to commit these offences.”

All wild birds, including jackdaws, are protected under the Wildlife and Countryside Act 1981 and it is an offence to kill, injure or take them without a licence. The maximum penalty, if found guilty, is six months in prison and/or an unlimited fine.

The RSPCA is a charity and relies on public donations to exist. It costs the centre £50,000 to feed the 6,500 animals which are admitted every year. The food bill for seals alone costs £500 a week. Anyone who would like to support the vital work of Stapeley Grange can now donate online at www.justgiving.com/campaigns/charity/rspcahq/stapeleygrange.