‘Local celebrity’ swan is released back into the wild - A Northwich swan who spent six weeks recovering at an RSPCA wildlife centre after suffering multiple injuries has been reunited with her mate. 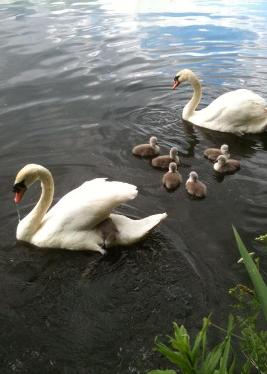 The swan, who is nicknamed Mabel, is a well-known character on the River Weaver, near to Monarch Drive, along with her mate Albert and their nine cygnets.

The swan, who is nicknamed Mabel, is a well-known character on the River Weaver, near to Monarch Drive, along with her mate Albert and their nine cygnets (pictured right).

However, the RSPCA was contacted on 2 June after a member of the public became concerned about Mabel’s behaviour -  on the same day that seven of her cygnets went missing

She was collected by an RSPCA inspector and taken to the charity’s Stapeley Grange Wildlife Centre, in Nantwich. There, she was treated for injuries consistent with being attacked by another animal, which was confirmed later to have been a dog. She had also been shot, was covered in mites and tested high for lead levels in her blood.

“She was very poorly and the odds were against her,” said Lee Stewart, manager at Stapeley Grange. “We put her on antibiotics and very slowly she started eating more and putting on weight. After six weeks, she was well enough to be released back into the wild, so on Sunday (16 July) I took her back to the spot where her mate and cygnets were.

“After so many weeks caring for an individual animal, it’s always nice to get the opportunity to release them back to the wild - it’s always very exciting and rewarding.

“As a result of Mabel’s story, more people in the area now know about the work we do at Stapeley Grange and have been fundraising for us, which is fantastic and very much appreciated.”

Cheryl Tyson contacted the RSPCA back on 2 June, when she saw Mabel looking distressed at the side of the river.

She said: “Mabel was in such a sorry state. I have heard that it was touch-and-go for Mabel and I kept ringing up Stapeley 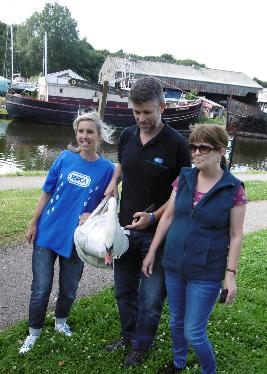 “I’ve been going down to the river to check on her mate and their cygnets as he’s had to cope with an awful lot. Getting Mabel back has been good for him.

“I’m so delighted that Mabel has been returned - she has become a bit of a local celebrity as a lot of the community have been interested in finding out how she is doing. Our river would look very different without them.”

Charlotte Wardle and her family, who live nearby, have been feeding Mabel and Albert for the last three years. Charlotte said: "It is fantastic to see Mabel back on the river where she belongs with Albert and ‘the twins’. Mabel is now something of a local celebrity on the river and her plight has brought together the local community. Thank you to everyone in ‘Team Mabel’ and of course the fantastic staff at Stapeley Grange.”

Anyone who is concerned about wildlife in the local area should contact the RSPCA’s 24-hour cruelty line on 0300 1234 999. Advice on what to do if you see an injured wild animal can be foun don our website at: www.rspca.org.uk/adviceandwelfare/wildlife/injuredanimals.