A video shows the moment a seal pup which was rescued from Albert Dock in Liverpool is taken from an RSPCA wildlife centre and returned to the water.

The seal was spotted resting out of the water by a member of the public who reported the matter to the animal welfare charity on Wednesday, November 4. 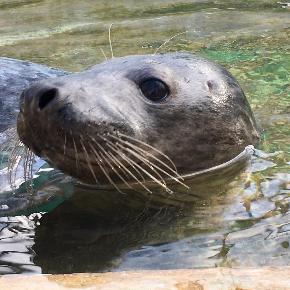 The RSPCA advised the caller to monitor the young seal as it is not unusual to see them by themselves and often their mother will be nearby in the water keeping an eye on her resting pup.

If a seal appears fit and healthy and shows no sign of distress it is advised that they are watched from a safe distance for 24 hours as often they will return unharmed to the water.

In this case the seal was still at the location in the evening so a volunteer with another organisation went to help the pup, which was found to have some minor wounds on its flippers and under its chin.

The seal was taken to the RSPCA’s Stapeley Grange Wildlife Centre in Nantwich, Cheshire.

Staff at the centre named the 32 kg pup Swede and treated him for his injuries before he was placed in an outside pool to socialise with other seals to get him ready for his return to the wild.

On Thursday  (19) he was taken back to the place near where he was found by RSPCA animal rescuers Inspector Joanne McDonald and Inspector Caren Goodman James (pictured above) and was released back into the River Mersey.

Lee Stewart, manager at Stapeley Grange, said: “Swede came to us with flipper injuries and injury to his chin which suggests he may have hit some rocks.

“He was treated by our vets and then we cared for him for a fortnight until he was ready to be returned to the wild.

“We have 10 seals at the centre currently and as you can imagine they take a lot of feeding and some stay with us for three to four months. 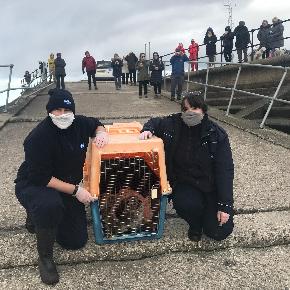 “They will each get through about 3 kilos of mackerel or herring every day which will cost the centre hundreds of pounds every week.  But it is important to build their weight up before they are returned to the wild.

“It is hard work rehabilitating seals but it is so rewarding when they are released back into the wild after they have been rehabilitated.”

Joanne added: “The crate was quite heavy as Swede is a big seal but between us we managed to get him to the water's edge and with a bit of encouragement he was back in his home environment. 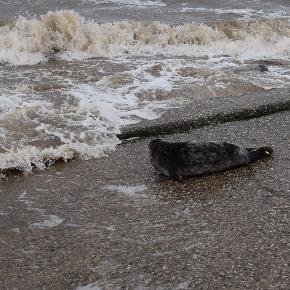 “Quite a crowd had gathered to watch and it was a really nice sight to see him happily swim away.” The RSPCA advises the public not to approach pups they see as these are wild animals and can have a nasty bite.

The RSPCA is currently caring for over 70 seals in its four wildlife centres and as a result, has very limited capacity for other animals.

As a result, we ask members of the public to monitor the seal from a safe distance for a 24-hour period, to see if the mother returns before contacting the animal welfare charity on 0300 1234 999. In many instances the seal may be perfectly OK and not need to come into care,and we would prefer to leave them in the wild whenever possible.

To donate to Stapeley Grange, visit the centre’s JustGiving page.

For more information about what to do if you’re concerned about a seal pup, please visit the RSPCA’s website.

A video of Swede’s journey is available to download from this link: https://spaces.hightail.com/receive/FzpBck5hjq/Y2hlcnlsLmhhZ3VlQHJzcGNhLm9yZy51aw==