Grounded heron found in Cheshire village had been shot

A heron which was rescued by the RSPCA after he was found unable to fly was later discovered to be have been shot. 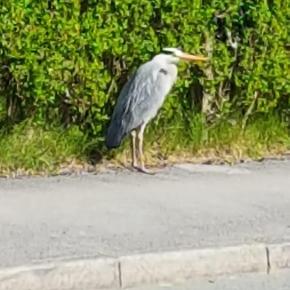 heron next to a road in Winsford, Cheshire.

The heron was reported to the RSPCA at around 2pm but according to neighbours the bird had been in the same spot since 6.30am.

An RSPCA officer collected the bird and as there were no obvious injuries, the bird was taken to the charity’s Stapeley Grange Wildlife Centre in Nantwich.

The vets at Stapeley Grange x-rayed the bird and found a pellet was lodged in the centre of his body. The shot had fractured the wing.

Lee Stewart, centre manager at Stapeley Grange, said: “Sadly, in such cases like there is no option but for the animal to be put to sleep as they are unable to be rehabilitated, which is incredibly sad. The Stapeley wildlife team, between them, have over 160 years of working with wildlife and know when these sad decisions have to be made.

“It is very distressing to think that people take pleasure in causing harm to Britain’s wildlife,” added Lee. 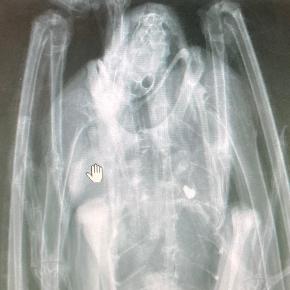 “These are deliberate acts of cruelty and we would appeal to people’s consciences not to commit these offences, rather live alongside wildlife and to enjoy it.”

All wild birds, including herons, are protected under the Wildlife and Countryside Act 1981 and it is an offence to kill, injure or take them without a licence. The maximum penalty, if found guilty, is six months in prison and/or an unlimited fine.

If you have any information on the shooting of this heron and see an animal in distress you can ring the RSPCA’s 24-hour cruelty line on 0300 1234 999.

The RSPCA is a charity and relies on public donations to exist. To support the ongoing work of the wildlife hospital, during this extremely difficult time, please donate to: https://www.justgiving.com/campaign/RSPCAStapeleyGrangeWildlife

The RSPCA is continuing its vital work rescuing animals during the Coronavirus crisis, with our frontline animal rescuers have been designated as key workers by the Government. To help the RSPCA keep rescuing animals like these and keep our animal hospitals and centres running for emergency treatment and round the clock care through these unprecedented times, please donate whatever you can spare at www.rspca.org.uk/covid.