Goose caught up in diesel theft after spill in Greater Manchester

A Canada goose was caught up in the aftermath of an attempted diesel theft in Greater Manchester. 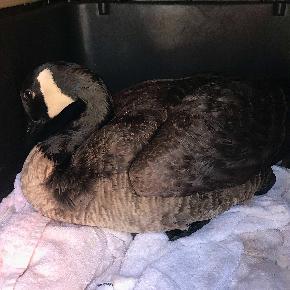 under-Lyne on Saturday (11 April) after the Canal & River Trust discovered the Canada goose covered in the greasy liquid.

She went to collect the bird and transferred him to the RSPCA’s Stapeley Grange Wildlife Centre in Cheshire for treatment. She said: “When I went to pick him up he looked really greasy but not coated in black oil like we usually see with oil spills. When I picked him up I could smell the diesel.

“He was with his mate but she hadn’t been affected so we left her in situ. Unfortunately there’s a large amount of diesel by the goose nest which mum has been sitting on for around a week so the trust is going to monitor this.

“Now the aim is to get the goose cleaned up and back to his mate as soon as possible.”

After making enquiries with the Canal & River Trust it appears the spill was caused after diesel thieves targeted the bus depot nearby. 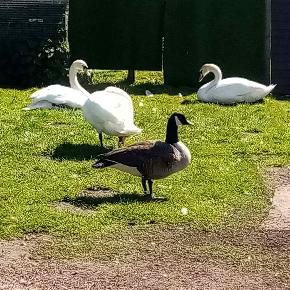 Nichola added: “I understand thieves had tried to steal diesel from a nearby depot but were thwarted and, at some point, diesel has either leaked into the canal or been dumped in the water there.”

The goose is doing really well now after several washes to remove the diesel.  It’s now outside with other waterfowl enjoying some well deserved sun, after what has been a stressful few days.  The goose will soon be ready for release back to the canal, under licence from Natural England.

Anyone who sees pollution on water or land should call the Environment Agency 24-hour incident hotline on 0800 807060.

Concerns for a wild animal that has come into contact with oil or other contaminants should be reported to the RSPCA’s emergency line on 0300 1234 999.

To support the ongoing work of the wildlife hospital, during this extremely difficult time, please donate to the Wildlife JustGiving site.