A swan with a fishing hook deeply embedded in his neck has been rescued from Holden Lane Pools in Stoke on Trent and operated on by the RSPCA.

The stricken bird - one of a breeding pair with two cygnets - was spotted at the angling lake by a member of public who contacted the RSPCA for help. 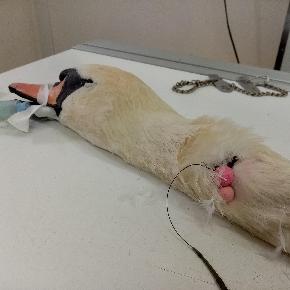 “This poor swan was found by one of our frontline officers, who rushed him to our specialist centre on Monday (28 September).

“It was a horrendous injury, with a fishing hook deeply embedded in his neck.  It is only by sheer chance that the hook narrowly missed his windpipe and gullet.

“After surgery to remove it, our vet carefully stitched up the swan’s neck and he is now on a course of painkillers and antibiotics.  He is now in isolation and making good progress; he will be monitored over the next couple of days by the team. 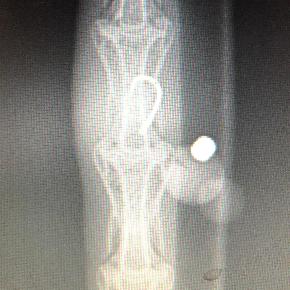 'It's very frustrating that we continue to admit hundreds of animals as a result of discarded fishing litter.  We know the majority of anglers are responsible but those that are throwing or leaving litter behind need to realise that it's injuring and possibly killing innocent animals.  Thankfully, it looks like we will be able to return this particular swan back to its family but sadly others are not so lucky".

The RSPCA receives thousands of calls about animals affected by angling litter every year. Incidents reported to the RSPCA included birds swallowing fishing hooks and entanglements in fishing line, often leading to death.

We urge all anglers to follow the Angling Trust’s Take 5 campaign and make use of the recycling scheme to dispose of waste tackle and line. Angling litter recycling points are now sited at the RSPCA’s four wildlife centres at West Hatch in Taunton, Somerset; Stapeley Grange in Nantwich, Cheshire; East Winch near King’s Lynn, Norfolk and Mallydams Wood in Hastings, East Sussex as well as hundreds of other sites throughout the UK.

The RSPCA encourages members of the public who see discarded litter to pick it up and dispose of it safely. Their action could save an animal’s life.