Bird of prey returns to the 'wilds' of Birmingham city centre

A peregrine falcon that was admitted to RSPCA Stapeley Grange with an injured leg has been returned to its home in Birmingham city centre.

The female bird of prey was originally found on the pavement of Newall Street in the city, 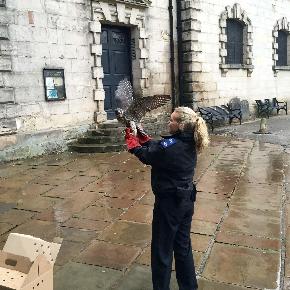 unable to stand and in pain.

She was admitted to RSPCA Stapeley Grange where she received treatment for canker, given pain relief and x-rayed to ensure there were no broken bones.

After four weeks in rehab she was released to where she was found.

Manager of RSPCA Stapeley Grange Lee Stewart said: “This poor bird was not standing when she was admitted to us on June 20 but the next day she was perching well and was very alert.

“We treated her for a number of ailments and thankfully, once she had built her strength up, we were able to release her back to where she came from - which was, unusually, the centre of Birmingham!

“Our work is all about returning animals to the wild - even if this one was from a major city centre!

“Peregrine falcons are such incredible birds and are recognised as the fastest creature on earth (up to 242 mph!!); it was a real pleasure to be able to nurse this one back to health and get her home again within a relatively short space of time.”

As a charity we rely on public donations to exist. To assist Stapeley Grange in carrying out their vital work please text RSPCA2 to 70007.