Battered and bruised seal pup washed in by severe storms

A five week-old seal pup that was washed up on to the beach battered and bruised has been admitted to an RSPCA wildlife centre for care.

The grey seal youngster was found with an injured flipper on the beach in Rhos-on-Sea, 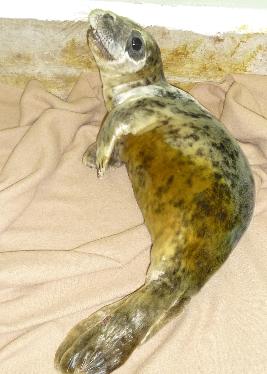 She is the first admission to RSPCA Stapeley Grange in Nantwich, Cheshire, this grey seal season and now staff are working hard to ensure that she survives and that she returns home.

Manager of RSPCA Stapeley Grange wildlife centre Lee Stewart said: “We always worry for young seal pups at this time of year when they weather is bad because they are so vulnerable and they can become separated from their mothers.

“The storms cause real problems for the seal colonies.

“This poor pup was found separated from its mother and with an injured flipper so needed help.

“Although stressed and with a few sores on her flippers, she is in good health and condition. She is feisty too - which is really important at this stage and is encouraging in terms of her long term prognosis.  When we are feeding her we have to be careful because as cute as she looks she has sharp teeth! 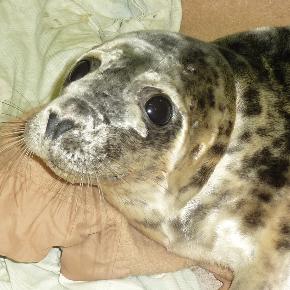 “Caring for feisty young seal pups like this can be extremely hard work when you are having to tube feed them fish soap or force feed them fish four-times-a-day - it certainly keeps the wildlife team on their toes!

“As and when she is feeding for herself she will be transferred down to RSPCA East Winch in Norfolk where they have large pools where she can socialise with other seals and compete for her food, which is really important if she is to survive in the wild.  She will then be transferred back up to the Welsh coast and released.”

We would advise that if members of the public spot a seal on a beach that they observe them from a distance and do not approach them. Seals are wild animals and have a nasty bite. It is also advised they keep dogs on leads on beaches that have seal colonies too.

The RSPCA is a charity relies on public donations to exist. Anyone who would like to support the vital work of Stapeley Grange can  text RSPCA2 to 70007‘ Texts cost £3 + standard network rate.