Three orphaned birds of prey which were found helpless at the bottom of a tree are being cared back to full health at an RSPCA wildlife centre in Cheshire.

A member of the public found the baby kestrels - initially thinking they were owls - shaking and frightened in the grounds of a residential home in Doncaster, on 5 June. They were collected by an RSPCA inspector and transferred to Stapeley Grange Wildlife Centre, in Nantwich, Cheshire.

As they had very few feathers when they were found, they were classed as nestlings - meaning they were too young to leave the nest and were unlikely to survive long.

Since arriving at Stapeley, the trio - just weeks old - have gone from strength to strength and it is hoped that they will be successfully released back to the wild when they have gained more weight.¿ 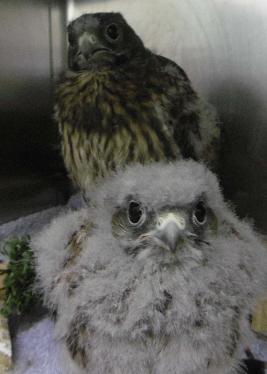 Lee Stewart, manager at Stapeley Grange, said: “We don’t get orphaned kestrels very often so it has been incredible to watch them develop as each day passes.

“When they were found, they were all shaking, one of them still hadn’t opened their eyes. But they are doing great and growing fast, even the smallest one is beginning to catch the other two up.

“They are currently being kept in isolation where they are weighed daily and fed four times a day. As soon as they are old

“They were very lucky to have been found when they were as they is no way they would have been able to survive on their own - at least now they have a fighting chance to return to the wild.”

Since the press release of our three kestrel chicks, the three have been joined by a fourth.  All are doing well but the team will be keeping a close eye on the latest arrival to make sure there is no bullying!

If you would like to help RSPCA Stapeley Grange with a donation of just £3, simplynext RSPCA2 to 70007‘ Texts cost £3 + standard network rate