Last year, the RSPCA received 1,240 calls from people in the north west from people concerned about baby birds found away from their nest - and some of these baby birds were brought in to Stapeley Grange by well-meaning members of the public

Since 2014, there has been an 80% rise in the number of fledglings - older baby birds that are starting to fly, that have been brought into the RSPCA’s centres. However, what many people don’t know is that fledglings can generally be left to be cared for by their parents. 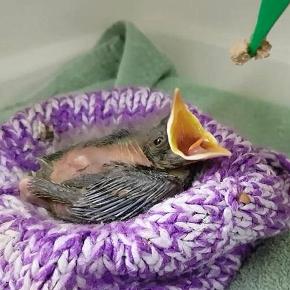 are more likely to need help.

But how can you tell the difference between a nestling and a fledgling?

In simple terms, nestlings have no feathers or very few.  But most fledglings have all or most of their feathers and leave the nest just before they can fly. Unlike nestlings they can also perch, hop and walk.

During the annual baby bird boom at this time of year, the RSPCA’s wildlife centres like ourselves care for over a thousand 'orphaned' fledglings each year, picked up by well-meaning people. But many of these birds are not orphans and are often better off if they are left in the wild. The RSPCA as a whole has seen a 81% increase in the number of calls to collect fledglings over the past 5 years (from 3,835 in 2014 to 6,958 in 2018), so it is really important to ensure it is only those that really need help that are brought in. 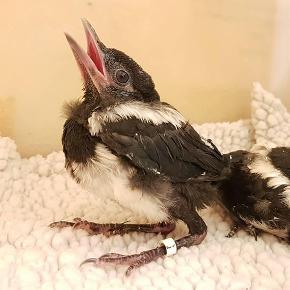 Fledglings have all or most of their feathers and leave the nest just before they can fly. If one is seen away from the nest, it should be left alone and watched from a distance for up to two hours to ensure the parents are returning. It is likely the parents are nearby and will still be feeding the bird.

If anyone spots a nestling, they need assistance and should be taken to a vet, a local rescue or they should call the RSPCA. Fledglings can usually be left alone but if a fledgling is injured or has been attacked or appears to be orphaned or separated from their parents, people should call the RSPCA for help.

We advise never to try to return a bird to the nest as this may disturb the other young birds and may be illegal. If a fledgling is in immediate danger, it should be placed in a sheltered spot a short distance away.

The RSPCA has produced a useful printable step-by-step guide which can be downloaded from our website explaining the types of situations where the babies of common garden birds might genuinely need helping, and when the young bird is purely exhibiting natural behaviour as part of its development, in which case it is usually better to leave well alone.

There are exceptions to these rules. For example, tawny owlets can climb back up into the nest, so if one is found under a possible nest site, the little bird should be monitored from a distance to see if the parents are nearby. If their call is heard, the young bird should be left alone.

If, after monitoring, the fledgling is genuinely orphaned, it should be taken it to a wildlife rehabilitator. Other species, like gulls, ducks, swans, geese, swifts, swallows, house martins and birds of prey need to be dealt with on a case-by-case basis and we would advise anyone who has encountered young birds of these species in need of help, to call the RSPCA’s emergency line on 0300 1234 999, for further advice.

This year is a big year for Stapeley Grange, as it’s our 25th anniversary. Over this time our team would have helped over 130,000 wild, domestic and exotic animals. Please follow us on Facebook RSPCAstapeleygrange or twitter: @RSPCAstapeley or @Stapeleycats to find out what events we have planned to celebrate this achievement. You can also sign up to our quarterly newsletter: https://www.rspca.org.uk/stapeleynewsletter