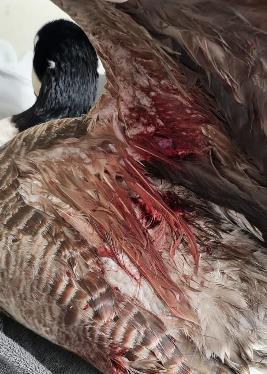 The RSPCA is appealing for information after a Canada goose was left with horrific injuries when she was shot with an airgun in the Warrington area.

The animal welfare charity was called to reports by dog walkers that they had seen that a goose was struggling to swim in the Bridgewater Canal, near Spring Lane, Lymm.

Animal rescuer, inspector Jenny Bethel was sent to the scene and could see the bird was laying on her back and beginning to float upside down on the canal.

It was getting dark but she managed to safely catch the bird and could see some blood on her feathers so rushed the goose to an emergency vets where her horrific injuries were discovered.

Sadly the vet decided the goose was so badly injured that she needed to be put to sleep to end her suffering.

X-rays taken of the body at the RSPCA’s Stapeley Grange Animal Centre, in Nantwich, revealed that the goose had been shot with an airgun - the pellet had gone through the wing and into the spinal area.

Jenny is now appealing for information to trace the ‘callous’ person responsible for the attack.

She said: “This is a popular area for walkers so it is concerning that there is someone armed with this type of weapon taking shots in the area.

“It is awful that this bird was callously shot in what can only be described as a cowardly attack.

“The bird was then left suffering and in pain but fortunately some dog walkers came across the distressing scene. 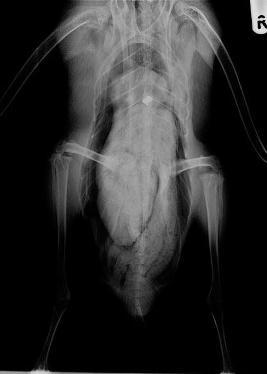 “I think if they hadn’t spotted her she would have got to a point where she would not have been able to hold her head up any longer and would have drowned.

“It is so upsetting as when I was rescuing the bird I could see her mate flying around looking concerned and who knows she may have had a nest of eggs in the area as it is that time of year.”

The incident happened on Friday, May 14 and anyone with information should contact the RSPCA appeals line on 0300 123 8018.