We are appealing for funds to help with the care of an elderly dog who was rescued from the cold. 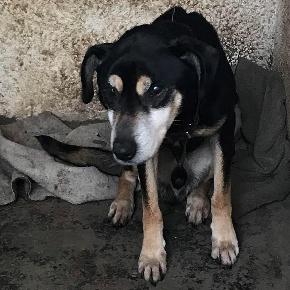 Billy a 15-year-old crossbreed dog who was found in an exposed porch in the cold and lying on a wet blanket, was rescued by the RSPCA on one of the coldest days in February.

The dog, now named Bill by RSPCA staff, had been left out in the cold for two days as his owner thought he had died.

When Inspector Laura Barber attended, the elderly dog was clearly in a bad state but his tail started to wag at her approach. She said: “This poor fella had been left out in sub-zero temperatures as sadly his owner thought he had already died! I have no idea how he had survived but I was so grateful to see his tail wag when I arrived. Bill was signed over into our care as he is in need of costly veterinary treatment. The poor fella is thin and has a huge, open sore on his back. The RSPCA Scarborough Branch have been absolutely brilliant and agreed to take him into their care but sadly he needs surgery to remove the lump on his back, as well as neutering and a dental procedure.”

Bill is now doing well at the vets following his operation which was done at the earliest opportunity to prevent any further suffering. Altogether, his treatment alone is expected to cost around £900 so the RSPCA Scarborough Branch are appealing to help fund the cost of Bill’s treatment.

Kath, Dog Coordinator at the RSPCA Scarborough and District Branch, said: “I’m really pleased our inspector was able to rescue Bill and he’s now getting the care and love he deserves. It really shows that we don’t give up on older animals. We all want to see Bill recover and live out the rest of his retirement years in a warm and cosy home.

“RSPCA Branches are separately registered charities so we raise money to help care for local animals in our area. The last year has been particularly tough for charities like ourselves due to the impact of the pandemic, so we are appealing to kind members of the public to support Bill’s recovery and donate to our Just Giving page.”