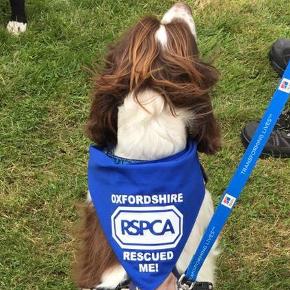 Roxy aged 10 years arrived at the Branch in August 2016, she came to us from a very disturbed and unsettled home environment in North Oxfordshire.  When she arrived with us she was in extremely poor condition and she had been subjected to severe and prolonged neglect.

Over many years Roxy had apparently been used as some sort of puppy machine, presumably purely for financial gain to her then owners.  The vet report on Roxy when she first arrived with us was not good, her condition was so poor it was felt unlikely that she would ever fully recover from her terrible past experiences.  She had severe alopecia on the majority of her body which had resulted in a nasty skin condition, a serious yeast infection in both ears and around her face and other parts of her body, open and bleeding calluses on all of her legs with her front forearms particularly bad due to constant licking and gnawing.

In short Roxy was a very very sad, timid and frightened little dog and the fundamental cause for these serious conditions was quite simply neglect; with a poor diet, lack of daily exercise combined with days and days of sheer boredom and stress she had slowly been allowed to deteriorate.  Following a number of visits to our vets and a thumping dose of steroids supplemented with a proper diet and exercise regime she began to stabilise and then improve.  Daily cleaning of her ears to remove the yeast infection with handfuls of cream for her skin and sores slowly started to transform her into a new dog.

As the days and weeks past she became more comfortable with herself, her confidence grew and as her health continued to improve her kind nature and happy disposition started to immerge.  Previous blood tests had also revealed an underactive thyroid condition which needed treating, she is now receiving a daily ongoing thyroid boost which is helping her coat to re-grow and keep her metabolism stabilised.

Whilst Roxy still has some way to go her quality of life has been transformed and she is experiencing so many new things that she never had the chance to enjoy before; running in the woods, jumping in streams, meeting other dogs and people, all with the feeling of safety, security and most importantly of being loved.”

Her days out at our Branch events and meetings are a great source of fun to her as is her following of friends on facebook.  We get involved with many different activities within the Branch and whether it’s out and about or in the office, whenever possible, she is there getting stuck in or watching what goes on and giving herself such a thrill, she does still have her moments but overall this little dog’s life has been transformed, quite simply she has been rescued.

Roxy is still having treatment, if you could help support this little dog please OXON22 + £2 to 70070 to donate £2. Every penny is kindly received and will make a difference to local animals.