Franco and Sparrow, Sinor and Sinorita, and Sammy 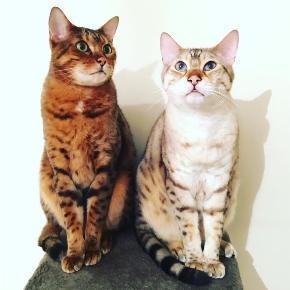 Two beautiful 9 year old Bengal cats who, unfortunately, came into care as their owners had just had twins and were struggling to cope with the babies and cats.  We managed to rehome them direct from their existing home to new one so to avoid too much stress for them and both have settled in well.

This pair came in via the inspector and it was just a case of to many cats in one house. Brother and sister about 7 months old who were a little shy to start with but after couple of weeks really came out of their shell.  Both were neutered, micro-chipped and vaccinated before going to their new home together.

Sammy is a 12 year old long coated silver tabby who came to us via the vets, he was signed over from his owners as he had a broken leg and his owners could not afford the vet bill.   His leg was fixed and needed a few weeks of care at the cattery to recover.  Sammy is such a friendly and chilled boy who has now found his new home.