131 people were given advice during the five-day event, down from 198 last year and the lowest figure since 2010. The number of warnings was also down to 5, from last year's 14.

"There have been a couple of incidents posted on social media, which we're aware of and have either dealt with or are dealing with, but on the whole, this year's fair has been a good one.

"We, and our partner animal welfare charities, have a significant presence at the fair, and this year's team was the biggest yet, but we can't be everywhere and inevitably, despite our best efforts, there will be things that we just don't see.

There are five on-going investigations compared to four last year, though none of these relate to overworking and exhaustion of horses. For the first year in a long time, there were no incidents involving dogs in hot cars or environments.

"The weather plays such a big part in the kind of incidents we deal with at the fair.

"This year's weather was very mixed, with a lot of rain on Saturday and Sunday, but it's still really pleasing that there were no significant issues with either of these things this year.

"It was also really pleasing how positively and patiently people responded when the river ramp was closed due to the weather conditions, which we know can be frustrating."

This year 34 of our officers attended, including specialist equine officers from across England and Wales

It's our biggest deployment of staff and the biggest multi-agency event of the year, with six other horse organisations also involved. 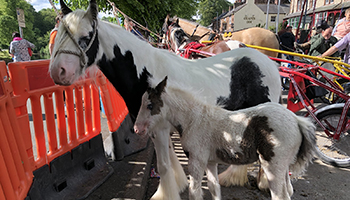 All of the animal welfare charities (all members of the National Equine Welfare Counci) along with The British Horse Society (BHS) also manned an information and education tent on Salt Tip Corner where travellers were able to share knowledge and discuss issues relating to horse care. Now in its ninth year, the tent continues to grow in popularity thanks to interactive activities including specimens of real horse parasites and body condition scoring.

Sixteen welfare awards were handed out by vets as part of Redwings' campaign to recognise and champion horses in outstanding condition. This year's awards included new prizes for Trotters who scored highly in free fitness tests provided by Redwings' vets and a brand-new People's Champion award voted for by fair-goers. A further six Rising Star awards were made to the next generation of owners, who all demonstrated excellent care and attention to ensure the health and happiness of their horses. To raise awareness of new microchipping legislation coming into effect in 2020, all winners were offered the chance to have their horse microchipped and passported for free, if they were not already, with three given out.