We're appealing for information to help find the person responsible for beheading a dog and severing her front leg before leaving the dead pet to be found by her distraught owner. 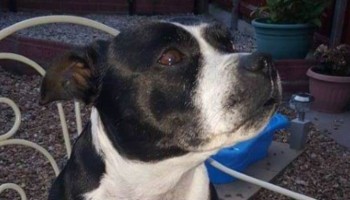 The gruesome discovery was made by Andrea Jarvis after she returned to her home in Vernon Street, Bilston, Wolverhampton, and called for her beloved Staffordshire Bull Terrier Hollie to come for her tea.

When Hollie didn't appear she went to look for her and found her severed body on the patio in her garden.

She could see Hollie had been partially beheaded and her front leg had been almost severed off.

It was horrific and so upsetting

I just couldn't believe what I was seeing - Hollie was dead and her body had been left cut up in such a terrible way.

We have had Hollie for 13 years and she was such a loving dog I can't believe this has happened.

When I couldn't find her I expected she was curled up on my bed - nothing could prepare me for what I found - it was horrific and so upsetting.

I'm struggling to sleep at night now it has been terrible and my other dog Maise (6) is missing Hollie too. I just hope someone will come forward to the RSPCA so we can find the person responsible.

Us and West Midlands Police have launched a joint investigation following the incident, on Tuesday, May 19, but no suspects have been identified and it is not clear how or where Hollie was killed.

RSPCA Inspector Adam Bailey, who's investigating, is now appealing for information to find out who is responsible for her death.

We're keen to trace anyone who may have information

We don't know why or how Hollie was killed but we believe she was taken from the garden - where she was left as Andrea went to work - and killed elsewhere.

There was no blood in the garden which suggests the attack happened elsewhere.

Her head was almost decapitated and her front leg had been severed and was hanging on by a piece of skin. It seems she was then brought back and dumped on the patio.

The injuries sustained are horrendous and this has come as a huge shock to her owners.

We're keen to trace anyone who may have information about what happened to Hollie or to anyone who saw anything suspicious to call our appeals line on 0300 123 8018.

To help us keep helping animals and to keep animal hospitals and centres running for emergency treatment, and round the clock care through these unprecedented times, please donate whatever you can spare.