Appeal for information to find owners

Three completely bald puppies with a skin condition have been dumped at a vet practice in Halifax, West Yorkshire - a week apart.

Two Staffie-type puppies were brought into West Mount Vets, on Pellon Lane, at 5.30pm on Thursday 7 February. A man wearing a hoody and tracksuit carried a box into the reception area, put it down and left before staff realised what was happening. 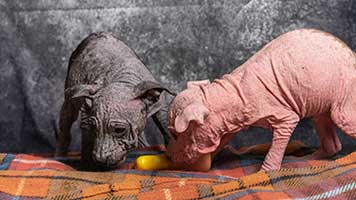 Our Inspector Sarah Bagley, who is investigating, said:

When the staff opened the box they found the two puppies.

One is blue-coloured and the other is cream-coloured. They are both female and thought to be around four months old.

Neither of them had any hair on their body, which is a result of them having a severe case of the skin condition demodectic mange.

The puppies were taken to our Leeds, Wakefield & District Branch Animal Centre where they're on daily medication and having regular medicated baths. They have been named Dobby and Winky after Harry Potter characters.

I'm so happy to say that they're improving every day.

They were really nervous when they arrived and shaking. Now they are running around the animal centre arena having loads of fun, playing with toys and barking at people. They've really come out of their shells.

Their skin was so red and angry-looking when they first got here but their fur has already started growing back at the base of their tails.

It'll be some time until we're able to rehome them but things are definitely going in the right direction.

Third puppy left behind by man in hoody and tracksuit

A third puppy was brought into the same vet practice in a box by a man wearing a hoody and tracksuit - thought to be the same man - at 5.00pm on Thursday, 14 February.

He spoke to the receptionist who took some details for him. When she went to fetch a nurse he left, leaving the puppy behind.

The puppy - a blue-coloured male - was collected by one of our officers after the vet practice called us. He too was taken to our RSPCA Leeds & Wakefield Branch Animal Centre to join his litter-mates. He has been named Albus.

It's unbelievable that someone has dumped these puppies in this way not once but twice. Staff checked out the details given by the man, which included a telephone number which is unobtainable.

It's taken a long time for the mange to take hold like this, in fact it's thought these puppies have probably had it for most of their lives.

I am very concerned about any other animals this person may have in their care.

If you have any information which can help us identify the owners of these puppies please contact our inspector appeal line 0300 123 8018.

Help us care for animals in need

Help us to rescue, rehabilitate and rehome more abandoned, neglected or abused animals like Dobby, Winky and Albus by giving a donation today, it's quick and easy to do.