Kitten back from the brink after life-saving blood donation

A young kitten who was rescued by our team and brought to vets needed an emergency blood transfusion to save his life.

The ginger kitten, who was just five weeks old, was found at a property in Milton Keynes, living in unsuitable conditions. He was covered in fleas which had become so severe he was anaemic and very weak.

An emergency blood transfusion was needed

Our team took him to Milton Keynes Veterinary Group at the Walnut Tree, where it was decided he would need an emergency blood transfusion to save his life.

Sue Taft, a member of staff at our Milton Keynes branch said:

This poor kitten was signed over after he was found collapsed and near dead. He was absolutely covered in fleas and severely anaemic so the vets decided his only hope was a blood transfusion so I took my own cat Brian down to help out.

As soon as the blood went in, the little kitten started to pick up and after a few days he was happy and eating again as kittens do. We called him Brian Junior after our own lovely cat who saved his life.

Brian and Brian Junior are both doing well 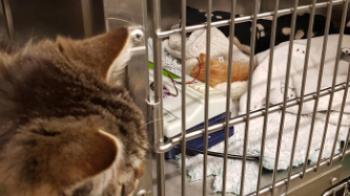 Brian Junior came into our care in October, last year before going into foster care where he received some much-needed love and attention. His fosterers fell in love with little Brian and decided to give him his forever home.

Sue's four-year-old tabby cat Brian was also rescued by our team - he came into our care with a badly mangled leg which needed amputating before Sue could give him his forever home.

Brian Senior has donated blood to help other moggies previously. The process requires a light sedation but Brian was back to his old self within hours. As with any sedation, there are some risks but also lots of benefits when it comes to rehabilitating cats like Brian Junior.

There's a variety of conditions which can cause severe anaemia in cats and this can sometimes result in the need for a life-saving blood transfusion. There may be a lot of information out there about humans donating blood but the idea of pets giving blood is less known. Sadly flea anaemia is a relatively common cause of death in young kittens. If owners are concerned about fleas on their pets they should speak to their vet who will be able to provide the most effective and safe treatments. 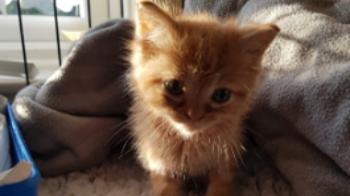 Unlike humans, cats can't give consent so it's the owner who must give consent on their behalf. This is why, if you're an owner considering using your cat as a blood donor there are some risks you should consider first.

Most cats will need to be sedated for blood donation and this in itself carries a small risk as the drugs used in sedation can lower blood pressure which could be a problem if your cat has any underlying heart or kidney disease. The removal of the blood itself also lowers blood pressure adding to the risk.

A full, clinical examination of your cat and some blood tests should be carried out by a vet first to ensure that they are a suitable donor.  Find out more at International Cat Care online.