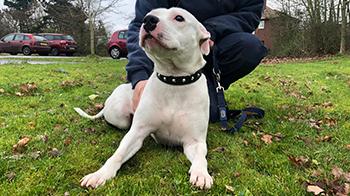 Snoop the abandoned dog is receiving lots of love while he's being treated for 'severe separation anxiety' at our animal centre.

The dumped dog has received 'thousands' of adoption offers (including from the rapper Snoop Dogg) after millions of people around the world saw the viral CCTV footage.

The footage shows the Staffordshire bull terrier (nick-named 'Snoop') being cruelly abandoned on a street in December.

In the footage, a man is seen leaving the passenger side of the car carrying a dog bed and leading a Staffie. The footage shows him cross the road, leaving the bed on the pavement and unclipping the dog's lead, before running back to the car and driving away. All while the distressed dog jumps up at the window and chases the car as it leaves.

Snoop is now receiving care at our centre

Thankfully, the dog was found sitting in the bed by a passer-by during the following hour. They took him to a local vet who called our helpline.

Whilst the investigation into his abandonment continues, Snoop is being cared for at our centre in Shropshire, where staff are giving him lots of love and helping him to feel secure again.

Our investigation is still ongoing and so we continue to urge people who have any information to contact us on 0300 123 8018.

It's still early days for Snoop as what happened to him has caused him a lot of distress. Staff who are caring for him have found that he has severe separation anxiety, which is no surprise after what happened to him, so they're working with him to try and alleviate this.

We're so grateful to all the millions of people who have shared Snoop's story across the world. At the moment he isn't available for rehoming while we work with him and continue to assess him and see what sort of home he would be suited to.

We have been overwhelmed by the hundreds of supportive messages for Snoop and all the people who have offered to give him a home, including some well-known faces such as rapper Snoop Dogg, comedian Sue Perkins and journalist Andrew Neil

We're still getting to know Snoop just as he's getting to know us. He loves to play so we're teaching him to play nicely as he gets very overexcited! He's such a loveable character and enjoys being around people. He just loves getting close to people, sitting between their legs and having cuddles, and is certainly enjoying lots of love and affection from our staff.

After Snoop's assessment, we will then start taking applications for him so anyone interested in adopting him can keep an eye on our Find a Pet page.

Snoop is sadly one of many animals in our care

The RSPCA rescues, rehabilitates and rehomes dogs, many of whom have been the victims of the most unimaginable cruelty or neglect and it's a sad truth that we see more Staffordshire bull terriers and Staffie-crosses than any other type of dog.

Even though Snoop isn't available for rehoming at the moment, we still have many other Staffies just like Snoop who are looking for loving new homes, all of who are listed online on Find a Pet.