Terrified and sick dog dumped in kennel with dead siblings

Our inspector said it was the 'saddest sight' she has ever seen  as she launches appeal to find the person responsible.

We're appealing for information after a terrified and poorly dog was found dumped in a wooden kennel containing the decomposing bodies of her siblings.

The horrific scene was reported by a member of public 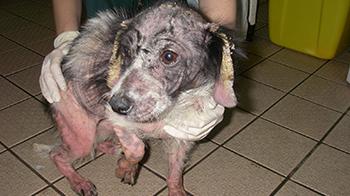 The tragic discovery was made at about  Tuesday 9 in Grange Road North, Runcorn, by a horrified member of the public. Gareth Forshaw was alerted to the scene after his dog, a Cavalier King Charles called Lily, began barking out of the window towards a lane which runs at the side of his house. He went to investigate and came across a wooden kennel before discovering the horrific scene inside. Gareth said:

I thought it was a strange thing to be dumped so I went to have a closer look and then when I peered inside I could see two dead dogs  - and the smell of their decomposition hit me. There was another dog out of the kennel in a terrible state,  with very little hair, which ran off.

Me and a neighbour went to get some water and food for the poorly dog and backed away from the kennel. She then came out from where she was hiding and drank all the water and ate all the food before jumping back in the kennel and laying on the dead dogs.

She was so scared. It was awful and really upsetting for all the neighbours who were trying to help, especially as we knew she had been left with the dead animals.

We called the RSPCA who advised us to try and get a dog lead on her so she wouldn't run away, which we did, and held her until an inspector arrived.

Inspector Lisa Lupson arrived at the scene and described it as;

The saddest sights I have ever witnessed in my 12 years as an RSPCA inspector.

It was truly horrendous - this poor dog was so ill and was so frightened, she still wanted to be with the dead dogs which we believe were her siblings.

Initial reports suggest they'd been dead for a number of days so it must have been horrendous for her to be there all that time not knowing what would happen to her - and she was so loyal she wanted to stay with them.

The terrier-cross is beig treated at Greater Manchester Animal Hospital

The terrier-cross, aged about one, was rushed to Greater Manchester Animal Hospital where she is being treated for severe mange and weight loss and will then be rehabilitated by us before she is re-homed.

She's the sweetest little thing. When we got to the hospital I gave her biscuit and in spite of all she had been through she wagged her tail - so we've decided to call her Biscuit.

I'm so grateful to the residents who rallied round to help me last night and know many of them were utterly appalled and horrified by what they had to see.

We desperately want to trace the owner of the dog and are appealing for anyone with information to call our appeal line on 0300 123 8018.