WHO WOULD DO THIS? DAMAGE CAUSED TO OUR SHOP WINDOW 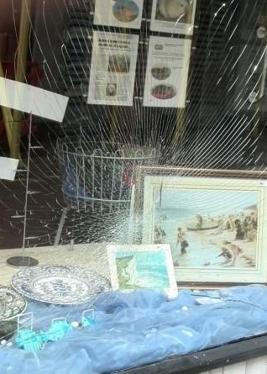 The scene at the RSPCA on Sunday morning.

A Hitchin town centre charity shop and a nearby restaurant both woke up yesterday morning to find their front windows smashed – and police are now investigating. 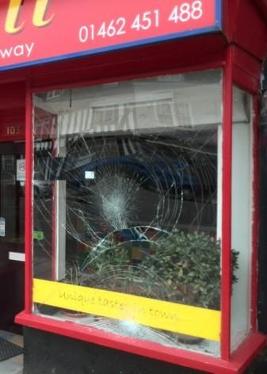 The scene at Eat Well on Sunday morning.

The RSPCA shop in Churchyard was targeted at some point between Saturday evening and Sunday morning – and at 1.45am on Sunday a man accompanied by another man and a woman was seen smashing the window at the Eat Well Chinese restaurant in Bancroft before making off towards Ickleford Road.

RSPCA branch trustee Anne Harvey told the Comet this morning: “We’re unable to say at this stage whether this was deliberate or something else, but it would certainly have taken some force to smash that window.

“For us it’s the expense of fixing the window, more than anything. Thankfully the display behind it was left intact.

“We’ve got the town centre rangers in looking through the CCTV. Hopefully we can find out what happened.”

Police are treating both incidents as criminal damage.

Anyone who witnessed what happened or has information that could assist should call police on 101, or Crimestoppers anonymously on 0800 555 111.