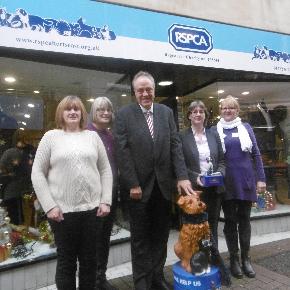 The large number of abandoned cats and kittens in Hertfordshire threatens to overwhelm the financial resources of the local RSPCA, Herts Euro MP Richard Howitt was told on a visit today (Friday 9 December 2014).

The Labour MEP visited the Hertfordshire East RSPCA Branch at their fundraising charity shop in Church Yard, Hitchin in his role as vice president of the animal welfare organisation.

The large number of abandoned cats and kittens is putting tremendous pressure on local resources, with 226 animals taken in so far this year, mainly cats but also includes dogs, rabbits, ferrets and hamsters.  In 2013 the branch took in 242 animals, in 2012 it was 211 and in 2011 it was 190 animals.

The Herts East Branch is coping, using foster carers and private catteries but the cost, met entirely from local donations, is already around £26,000 for private cattery fees and fostering and £40,000 on vetinary fees.

There is currently a waiting list of 17 cats and a kitten wanting to come into care that they do not have room for.

The reason for cats coming into the care of the RSPCA in Hertfordshire is people’s lack of care or understanding of their animals, according to local officials.  The most common reasons given so far this year are: “I am/my children are allergic”; “I am moving into rented accommodation and/or been evicted and cannot take the cats with me”; “I have been feeding a stray and I can’t look after it any longer”, or they are dumped in cardboard boxes outside vets or in various locations in fields, or underpasses or gardens.

The majority of cats that come into their care are not vaccinated, neutered, micro chipped, flea’d or wormed as people do not know they have to do this, or cannot afford to.

The RSPCA are critical that cats and kittens are traded so casually on social media web sites.  Sound advice as to how best to look after cats can be found on the charity’s own website.

The ‘cat crisis’ is not confined to Hertfordshire, with national figures from the RSPCA showing a 14 per cent rise in the number of cats abandoned this year.

Both local and national RSPCA have the same advice for cat owners – get your cat neutered at four months old.

Richard Howitt MEP, who is vice president of the national RSPCA, said

“The rescued cats and kittens I’ve been told about today need loving homes but there needs to be much more awareness about how to keep a cat as a pet.

Christmas time is one of the busiest for the RSPCA for animal abandonments.

Herts East branch need your donations: their main problem is lack of donations from the public as most people do not know the branch exists and go to the nearest animal centre which is Southridge in Potters Bar.

The RSPCA here in Hertfordshire East, and nationally, is under great pressure as the number of abandoned cats and kittens continues to rise.

The advice is not to wait until your cat has a first litter but to have it neutered as soon as it reaches four months.

The RSPCA is doing a wonderful job finding homes for neglected and abandoned animals but needs everyone’s help in learning how best to care for pets.

I’m working hard with the charity in the European Parliament to ensure that it is an effective voice for animal welfare across the continent.”