Dogs suspected to be a banned type are taken away from their owner and held in kennels. Many dogs find the process very difficult to cope with and can result in undesirable changes in health and behaviour.

Dogs will then be examined by an expert using a set of standards which are mainly based on appearance. Genetics or parentage are not taken into consideration which means that many dogs are unnecessarily subjected to stressful processes - just because of how they look.

Banned types can be lawfully kept and exempt from euthanasia if they don't pose any risk to public safety and the owner is considered fit and proper. However, conditions must be met for the rest of the dog's life which can negatively impact their welfare. For example being muzzled and on-lead whenever in public.

Sadly, many dogs will have to be euthanased and thousands have died because of BSL since 1991.

Fudge was just five-months-old when he was destroyed.

His owner, Carole from Liverpool, had rescued him at just six-weeks-old and had no idea he might one day be suspected to be a prohibited type.

But a neighbour, who thought he resembled a pit-bull, reported Fudge to the police.

BSL was something I knew nothing about until the police knocked on my door late one night.

She was not aware that she could challenge the ruling and apply to have Fudge exempted by applying as a responsible owner. This would have meant Fudge could live, although under restrictions such as being muzzled and on the lead at all times when out of the house.

Now I no longer respect the law that judges innocent dogs on how they look.

I am left with a legacy of guilt for being naive and a fear of ever owning a dog again. The law is proven not to have worked and needs radical change.

Dogs like Fudge, who pose no real threat, shouldn't be penalised based on his appearance.

Emma, from Durham, adopted Zara from her local rescue centre. Suspicions that Zara might be a prohibited type of dog were first raised by her dog trainer, and so owner Emma contacted her dog legislation officer.

Following an assessment, Zara was found to be of type, but, because she was so well behaved and had good character references from her trainer, she was allowed to stay at home until the day of the court case.

She was returned the following day having been exempted.

The conditions of exemption have impacted on Zara's health and behaviour. Zara is required by law to wear a muzzle whenever she is outside the home.

Her muzzle rubs against her nose - even though it is the correct size and is covered in fleece. The sores take a long time to heal as she is often required to wear the muzzle daily and for long periods of time. Zara must also be kept on a lead whenever she's outside - which frustrates her as she can't play with other dogs who are allowed freedom. Emma says:

It does make things difficult as there is no room for error, no mistakes or forgetful moments can be allowed to happen as they could lead to her being put to sleep.

I think that ALL dogs should be treated equally and on their individual behaviour, so the emphasis of the law should be on promoting responsible dog ownership and correct choice of breed.

Zara and similar dogs shouldn't have to be restricted in such ways that affect their welfare. If you agree please help us raise awareness by adding our 'Dogs Deserve Better' Twibbon to your Twitter profile picture. 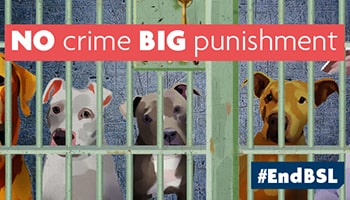 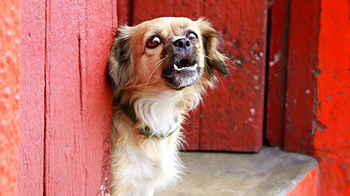