We're pleased to announce a new partnership with Transworld Publishers and the release of a new book The Dog Rescuers, which ties in to the perennially popular Channel 5 television series.

Presented by Alan Davies, the programme, which follows our Inspectors rescuing mistreated dogs, averages one million - 1.3 million UK viewers each week, has now been running for six series, over five years. A new series is due to be broadcast this year in line with the release of the book. 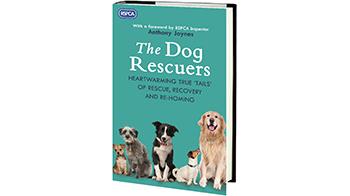 The Dog Rescuers: Heartwarming True Tails of Rescue, Recovery and Re-Homing follows some of the most inspirational stories of the dogs who have been saved by our dedicated and tireless team of inspectors. The book includes a foreword by RSPCA Inspector Anthony Joynes, who has been an RSPCA inspector since 2009, working across Merseyside. Anthony is a trained biomedical scientist who also fundraises for us in his spare time.

These stories are incredibly moving, but ultimately uplifting. It's a huge privilege to be working with the RSPCA on the project, supporting their important work with animals in distress.