null We rescue two seals with netting tangled around their necks

We rescue two seals with netting tangled around their necks 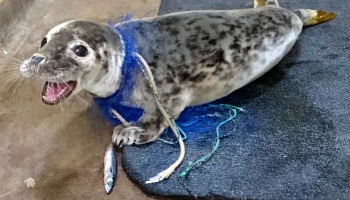 Our staff are battling to save the life of a seal who was rescued with deep lacerations to her neck after getting tangled in fishing netting.

Juvenile grey seal Galactica was collected by the Friends of Horsey Seals from Horsey, Norfolk, on Sunday (24 May) after being spotted on the beach with blue plastic netting tangled tightly around her neck.

She was rushed to our East Winch Wildlife Centre for specialist care. She's the second seal to arrive at the centre with netting injuries in the last week.

We admitted an adult seal last week who had been rescued by the Friends group from Horsey with fishing netting tangled tightly around his neck and head. His head was swollen and we later discovered it was full of pus.

As we desperately tried to untangle the netting from him he died. It was heartbreaking to see this big, beautiful creature die as we battled to save him.

Then, Galactica arrived just a few days later with the same injuries caused by the same culprit: fishing netting. Enough is enough.

Galactica is the third seal to be admitted this year and the 56th taken in by the Norfolk centre (since 2008, when we started seeing and recording these types of incidents) due to injuries caused by fishing litter.

Last year (2019), was the worst yet with 11 patients arriving at the centre due to these injuries, up on the eight from the previous year.

This issue isn't going away and we need to act to better protect our beautiful wildlife. Plastic and fishing litter is a silent killer for these beautiful animals, sitting beneath the surface of the waters and out of our sight.

Seals are inquisitive creatures who can easily become tangled or trapped as they search for food. Netting quickly weighs them down, makes it hard for them to swim and hunt, before slowly cutting and embedding into their flesh causing horrendous injuries and infection.

Sadly we know that the seals who make it to us are the lucky ones and I fear there are many, many more out there in our waters suffering the same fate.

It takes months to rehabilitate seals

We receive more than 5,000 reports every year about animals who have been injured or trapped by discarded litter. That's why we're urging people to safely, responsibly and properly dispose of litter and fishing litter to ensure our wildlife and marine life are safe from these hazards. 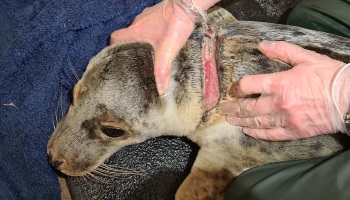 Galactica is now being treated with painkillers and antibiotics. A vet removed the netting which cut deeply into her flesh.

She'll now begin a long rehabilitation process which will include daily salt baths to gently clean the wound and help it heal. She's likely to be in our care for a number of months and will require at least four 25kg bags of salts a day with each bag costing more than £14.

Every year East Winch takes in more than 150 seals, from orphaned pups who have been separated from their parents during storms to adults being strangled by litter and netting. Seals are extremely expensive to look after so if you'd like to help East Winch please take a look at the centre's Amazon Wishlist (Delivery address: RSPCA East Winch Wildlife Centre, Gayton Road, East Winch, King's Lynn, Norfolk, PE32 1LG).

If you see an animal you have concerns about please call our emergency line on 0300 1234 999. We also have information on what to do with injured wild animals.

To help us keep rescuing animals like Galactica and keep our centres running for emergency treatment and round the clock care through these unprecedented times, please donate online.