Our new data has revealed we received reports of more than 2,200 incidents of cruelty to wildlife in 2020, with numbers spiking in May.

From hunting and fighting to beating and mutilation, incidents of 'illegal activity' and 'intentional harm' to wild animals started rising at the start of the lockdown this year:

We're concerned that as the nation goes into lockdown again and everything shuts down, some may turn to this barbaric behaviour for 'entertainment' and incidents may rise.

Lockdown has led to a rise in anti-social behaviour

"Our data shows that reports of cruelty to wildlife surged during the first lockdown. We fear a similar peak could happen all over again during this second lockdown, as some people again look for savage ways to pass the time.

"Our inspectors see first-hand the suffering inflicted by criminals on animals through wildlife crime such as badger baiting, dog fighting, hare coursing and trapping birds. 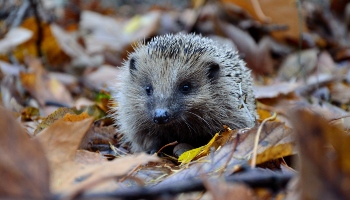 "We've seen some particularly distressing incidents in recent months, such as a magpie shot with a crossbow and two hedgehogs doused in fuel and burned alive. Police forces have reported a rise in anti-social behaviour during the first lockdown, when pressures and frustrations led to more of this type of crime, and we fear it may lead to some seeking 'entertainment' through these sorts of barbaric incidents involving wildlife.

"There's no place for cruelty to animals in today's society and we urge anyone who spots anything suspicious when out on their daily exercise or sees anything online to report it to our cruelty line or their local police force."

Distressing acts of cruelty have continued throughout lockdowns

Our inspectorate sadly has to deal with hundreds of incidents involving cruelty to wildlife.

Just days ago in Wales, a man was sentenced to prison for extreme cruelty to a hedgehog. The man had cut off the little animal¿s legs, had burned it and covered its head and eyes with molten candle wax.

Only last month, we were called out to a badger in Nantwich, Cheshire that had suffered some very severe wounds most likely from an illegal badger-baiting attack.

In September, a swan which had been shot in the neck with an arrow was successfully operated on by our vets.

Our teams work to crackdown on wildlife crime

Our Specialist Operations Unit works to uncover the culprits of these crimes and bring them to justice.

To help us to continue rescuing, rehabilitating and rehoming animals in desperate need of care please donate online or call our donation line on 0300 123 8181.