Share this...
Watch our hard-working team swim pony to safety after flood strikes 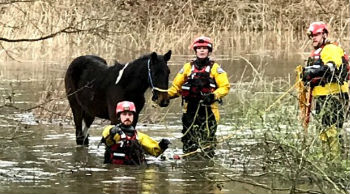 We've launched an emergency fundraising appeal after responding to more than 200 emergencies during Storm Dennis.

Our specialist water rescue team and our frontline officers have been working round-the-clock over the past 72 hours to assess and rescue as many animals as possible.

One of our water rescue teams were called to a flooded field beside the River Wey in Guildford - off Parkway - on Monday (17 February) after locals raised concerns about a pony who was struggling to stay on dry ground.

Our animal welfare officer and team leader, Carl Hone, was on the scene. He said:

We believe the young mare - a trotter type - had been trapped on a very small wooded area of higher ground, between the A3 and the river, for a day or two as the flood water around her had continued to rise and forced her further and further into the undergrowth.

When we arrived we waded across the water - which was extremely deep in places - and could see that she'd been there for some time as she'd eaten the bark off all of the trees in the vicinity. We managed to carry some hay over for her and she devoured it; she was clearly hungry.

Equine officer, Rebecca Carter, and floods officer, Nick Wheelhouse, swam over to secure the pony, quickly assessing that the water level was continuing to rise and that the cold, wet pony needed removing immediately.

As the light was fading and the water was rising we had to act quickly so we decided the best option to rescue the pony quickly was a tethered swim. We put a guideline across the water and attached it to the pony's headcollar. We ensured it was quick-release in case anything happened as we didn't want the pony to get tangled in the line.

Thankfully, the pony was young and active and easily managed the short swim across the deepest section before finding her footing on the ground our side of the floodwater. We covered her with a makeshift rug (an old sleeping bag!) to help dry her off and warm her up before transporting her to a boarding yard nearby.

The pony is settling in well at the yard where staff have named her Jemima Puddle Duck.

Our officers left a note for the pony's owners but if she isn't claimed after 14 days then she'll move to one of our rehoming centres.

We've had teams working tirelessly during the recent stormy weather to respond to emergencies and save the lives of animals in perilous situations. Every day, our brave officers have waded through cold water and even swum out to reach animals who need rescuing.

The RSPCA is part of Defra's National Flood Response Team and we have around 65 officers who are trained and equipped to deal with flood-stricken animals as well as a fleet of 35 inflatable boats that can be launched for water rescues.

Training our officers and ensuring that they have all of the appropriate equipment to ensure their health and safety, as well as that of the animals, is expensive and so it's been incredible to see the reaction to our fundraising appeal and to see how many people want to support us so we can continue to provide this emergency response during times of flooding.

Never put your own life in danger to attempt an animal rescue. Stay informed by calling floodline on. If you see an animal outside that looks like it's suffering or in danger, take a note of the location, time and date, and call our helpline on .

In less than 24 hours, an emergency fundraiser online has raised more than £1,400 from generous members of the public who were inspired by the brave efforts of our rescue teams during Storm Dennis. To donate please visit our Flood Appeal.