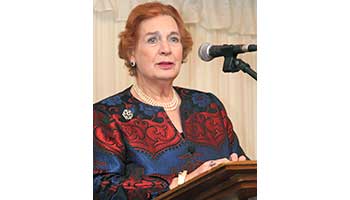 Baroness Fookes is one of our honorary vice-presidents. She's a Conservative politician and was Deputy Speaker of the House of Commons from 1992-97. On 30 September 1997, she was made a Life Peer.

She had previously been made a Dame Commander of the Order of the British Empire (DBE) in the 1989 New Year's Honours and became Deputy Lieutenant of East Sussex in 2001.

Baroness Fookes has remained committed to animal welfare throughout her political career. She served on the Council of the RSPCA 1975-92, and was its Chair from 1979-81.