The pandemic and China's wildlife trade

The pandemic and China's wildlife trade

Paul Littlefair, head of our international department, is an East Asia specialist with more than 20 years' experience promoting animal welfare in China.

The first months of 2020 have seen the world gripped by an unprecedented human health crisis. But it appears that the COVID-19 pandemic is also having a potentially lasting impact on the way China views wild animals...

Early reports from within China linked the novel coronavirus which leads to COVID-19 to a so-called 'wet' market selling wildlife in the city of Wuhan. The authorities reacted decisively. On 24 February the National People's Congress Standing Committee announced two decisions, the first to clamp down further on the illegal wildlife trade and the second 'to eradicate the bad habit of wanton consumption of wild animals'.

So how popular is eating wildlife in China? What's the connection between 'wet' markets and wildlife? And how might this global crisis change things for good? 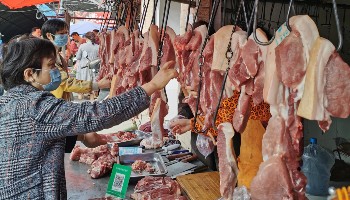 Until recent years China's international image was coloured by its reputation for being the world's biggest destination for wildlife products. And while the government has taken serious steps to combat the illegal wildlife trade - with the 2017 ban on ivory, for example - there still remains a strong market within the country for legal trade in all manner of wild animal products, whether that is fur, traditional medicine or meat.

How widespread is the eating of wildlife? It's true to say that China has a very rich culinary heritage, and many parts of the country have cuisines which feature a range of domestic and wild animals. However, the country is far from homogenous. A lot of Chinese find the tastes of regions outside their own home province as exotic and unappealing as some foreigners might.

An important point that's often overlooked is that a great deal of the recent trend for eating wildlife is not down to tradition. It's actually a modern fashion driven by higher living standards and the desire to try ever more expensive and 'interesting', novel dishes. The business has been driven by local governments and commercial enterprises which have first created and then stimulated this demand. Nationally most Chinese either never or very rarely eat wild animals, but in some regions it's become an important part of the local economy.

China has actually had wildlife legislation since 1988, but the focus of the law was to protect wild animals as a resource belonging to the State, and to allow them to be used 'rationally'. Since then, sometimes to take pressure off wild populations that were increasingly ravaged by hunting and poaching, the government has encouraged the farming of certain wild species. Turtles, frogs, bamboo rats, civets and many others have all been farmed or bred in captivity for food. In poorer parts of the country the government has promoted wildlife farming as a way of alleviating poverty, ensuring livelihoods in towns and villages where economic hardship was once common.

So the issue is complex. Farmers and breeders of captive wild animals who have until now had their business encouraged and boosted by government are this year suddenly being told that wildlife consumption is a 'bad habit' that needs to be combatted. For hundreds of thousands of mostly rural Chinese who have come to depend on this trade, somehow alternative livelihoods will now need to be found. 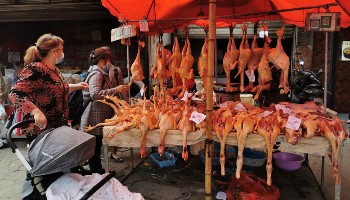 In much of the coverage of the pandemic there has been some confusion about wet markets, and an assumption that all Chinese wet markets sell wildlife, which is very far from the case. A wet market is simply a place where the customer can buy food fresh directly from the producer. I've visited many of these markets in China, and as well as fruit and vegetables you most often find fresh meat and fish, just as you would in local high street stores anywhere. So a call to ban 'wet' markets themselves makes no sense - it will not address the root of the disease problem.

It's true that in a very small minority of wet markets you can also see wild-caught animals and farmed wildlife for sale alongside domestic livestock such as poultry or rabbits, and this is potentially where the disease risk lies. The 2002 SARS outbreak was traced back to this kind of market in Guangdong, southern China. Typically, animals kept in wildlife markets are housed close together in stacked cages, often selected by customers and butchered on site. These unsanitary conditions are highly stressful for animals and tend to compromise their immune systems. This in turn allows viruses to emerge, mutate and spread between species and eventually to humans. We don't know with absolute certainty where the latest novel coronavirus originated, but most experts believe that it began in wild bats, while other species such as pangolins are suspected to have been intermediaries before transmission to humans.

Of course we could ask whether - from an animal welfare point of view - it matters which animals are implicated. It's not useful to demonise particular species when the problem stems from the practices seen in the wildlife farms and markets themselves, in the poor hygiene and the keeping and slaughtering of a wide variety of animals close together. Our own behaviour is creating the conditions for viruses to spill over from animals to humans. 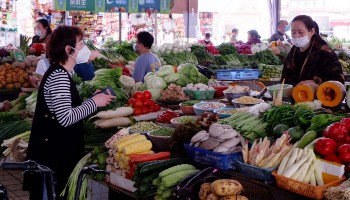 When the Chinese authorities announced a ban on the consumption of wild animals, the intention was that it would be temporary until the wildlife protection law could be amended to make the restrictions permanent. There are some big loopholes. The ban covers the eating of land animals but not aquatic animals - for example turtles. Also it excludes animals bred for their fur or for use in medicine.

Following the announcement, those markets selling wildlife were quickly closed down across the country. Recently some media have been outraged at news that China's wet markets have reopened, claiming nothing has changed. This is a misunderstanding of the situation. Some markets sold other meat as well, and they have of course reopened selling permitted livestock, fish and seafood, none of which are implicated in coronavirus. There's no widespread evidence of markets now selling wildlife illegally.

Since the temporary ruling on wildlife consumption was rolled out, around fifteen governments at province and city level have also incorporated the ban quickly into their own regulations, even ahead of a formal change to national wildlife law. At the forefront of these was Shenzhen, a city of 13 million on the border with Hong Kong. Shenzhen announced something extraordinary. Ahead of the rest of the nation, the city government decided to include an additional measure alongside the wildlife consumption ban: a prohibition on eating dog and cat meat. Zhuhai, bordering Macau, was the second city to follow Shenzhen's lead a week later. What is all the more remarkable is that both Shenzhen and Zhuhai are situated in Guangdong province, stereotypically seen as a place where no animal is off the menu.

We might ask, it's all very well changing the legislation or regulations but will that really make any difference to what happens on the ground? People are still going to eat wildlife, won't the trade just be driven underground? These are valid questions, and there is no doubt that the changes on the scale that's proposed will bring enormous challenges with enforcement. But the signal from the central government is clear: the days of farms, markets and restaurants where just about any wild animal could be bought and eaten, are gone for good.

The pandemic has been disastrous for human health and for national economies around the world. But it has drawn into focus the concept of 'One Welfare' - the idea that the welfare of humans, animals and the natural environment are inextricably linked. For China it has accelerated progress towards tackling wildlife trade and consumption, and has even brought groundbreaking progress in the protection of companion animals.