Share this...
Sickening attack as woman's pet cat is hanged to death from a wall in Liverpool

We're urgently appealing for information to help find the 'sick person' responsible after a woman's pet cat was hanged to death from a garden wall in Liverpool.

The poor cat was deliberately hanged 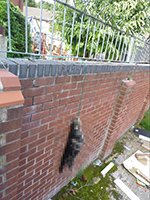 The poor cat called Lucky was found hanged from the wall in Hollies Road by a distressed member of the public.

They called our helpline and inspector, Joanne McDonald, was sent to the scene.

She said the cat had garden wire tied around his neck, which was then attached to a metal railing on top of a garden wall and her body was left dangling in what is believed to be a deliberate attack.

Lucky's owner has been left devastated by the incident

After carrying out initial inquiries she discovered the cat belonged to Michelle Doughty (56), of nearby Helmsley Road, who has been left devastated by the incident.

Her daughter Janine Doughty (34), who lives at nearby, said how Lucky was one of three cats owned by her mum. They cannot understand why anyone would carry out such a callous act on their beloved pet. Janine said:

Mum took Lucky in as a stray about six years ago, then she adopted Pepper and they had kittens which she gave to the extended family but kept their daughter, Poppy. They all got on so well and were great company for mum.

She's been left absolutely devastated by what has happened and finds it difficult to talk about it. As a family, we just can't understand how anyone could be so cruel and callous.

Lucky was quite well known in the area and would often go to neighbouring houses for attention or the local chippie for some food. He was well-liked.

He was also a feisty cat if he felt threatened, so we think whoever did this would have been bitten or scratched which may help identify the person responsible.

Both Pepper and Poppy keep looking for Lucky and just seem to be at a loss at the moment. She's really concerned about their welfare and that of other pets in the area.

We just think if someone is capable of doing this to a cat what other horrific acts are they capable of.

Inspector McDonald is now appealing for anyone with information about the attack to get in touch. She said:

I'm keen to trace the sick person who is responsible for this attack on a defenceless animal. The suffering and terror Lucky must have gone through during the incident doesn't bear thinking about.

The cat was discovered on August 16, so I am appealing for anyone who saw anything suspicious prior to this to get in touch.

There's a good chance the person responsible may have suffered scratches and bites as Lucky fought for his life, which may also help identify the offender.

The area at the back of the houses where this happened is a padlocked compound which is walled off and there is a padlock on the gate but youths have been seen accessing this area in the past.

Anyone with information about the incident should call our appeal line on 0300 123 8018.