This National Garden Week, the RSPCA is shining a light on cats who prefer a home in the great outpaws. 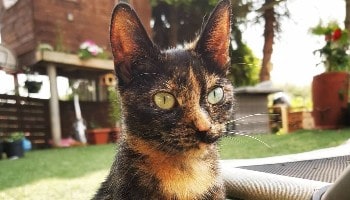 'Farm cats' are often nervous around people but still need someone to provide food, water, shelter and veterinary care when needed. As the name suggests, they would most likely be best suited to a farm, smallholding, or riding stables but some have even found quirky homes such as a garden centre, a garden treehouse or an outhouse.

Potential owners don't necessarily need to have a farm or riding stable to rehome a cat who enjoys the great outdoors, the charity is looking for homes of all different types to match the variety of different cats we have. And this National Gardening Week (2-8 May) the RSPCA is showcasing its 'garden cats'.

All cats are different and whilst some cats may enjoy nothing more than curling up on a lap on a sofa, there are other cats who come into our care which are much more suited to the great outdoors. These 'inbetweener' cats may be wary of human interaction but are not fully independent so they still need someone to keep an eye on them.

Whilst farm or stable cats may be widely known, not everyone realises that cats can also live in some rather quirky places such as plant nurseries, stately home gardens or even a treehouse in someone's back garden! Seeing cats roaming free, dozing in the sun and exploring to their heart's content can be really rewarding and so we're keen to encourage people to think about whether they could adopt an outdoorsy cat.

All the cats will be in good health, neutered, microchipped, vaccinated, where appropriate and treated for fleas and worms.

The minimum requirement for an adopter will be to provide a weatherproofed shelter, food and water at least daily and to keep an eye on the health of the cat and seek veterinary help when needed. They will also need access to land to roam, and vegetation such as woodland, fields or gardens.

Helios, a seven year old cat, came into the care of the RSPCA Canterbury and District branch in September last year after his owner sadly passed away. Helios was very wary of people and would hide in the cattery but a wildlife camera the staff set-up showed that he loved other cats and so the branch soon realised he would likely prefer life outdoors with other feline friends. He was rehomed in March and now lives in a garden which is over an acre with a wild area and a small woodland. Helios sleeps in a purpose built enclosure at night and can roam around the large garden with their other three female cats during the day.

Jada was rescued by the RSPCA as the young cat was struggling to give birth to kittens and required a c-section. She was taken into the care of the RSPCA Manchester and Salford branch and later rehomed to a large garden with her very own treehouse.

Jada was wary of people and needed her own space but loves other cats and so she now has a best pal in rescue cat Domingo who also encourages her to occasionally venture inside the house.

A group of cats live at a garden centre in Congleton which the RSPCA Macclesfield branch recently neutered as part of their Trap, Neuter, Release programme helping stray, community cats. The garden centre keeps an eye on the cats to make sure they have everything they need and in turn the cats get to be independent and explore the plant nurseries.

If you're interested in rehoming a farm cat or looking to adopt an animal as a pet register your interest and contact your nearest centre or branch.