Two ponies have been rescued in Wolverhampton, West Midlands, after falling into a pond where they got stuck. 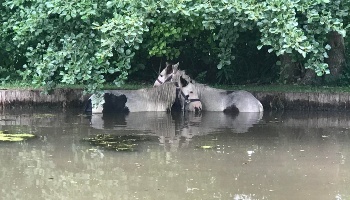 Our inspector Vicki Taylor was called to help after the ponies were spotted stranded in the pond neck-high in water in a garden in Great Moor Road on Sunday 9 August.

"The ponies had been found straying in Pattingham on Saturday night. Police were made aware and members of the public managed to get headcollars on the ponies and called a vet to see to the filly's injured leg. They were moved into a secure field while enquiries were made as to where they'd come from.

"Unfortunately they then managed to escape and fell into a pond nearby. Staffordshire Fire and Rescue Service attended and called me to help."

Vicki attended and contacted a vet and transport to come and collect the ponies.

"The vet checked them over and we moved them to boarding for the night to bed them down. They were exhausted and relieved to be somewhere safe and comfy for the night, and were fast asleep in no time at all!"

The ponies are now being cared for by staff at our Gonsal Farm Animal Centre, in Shropshire.

"If they've escaped from their home then we'd love to hear from their owners and reunite them. If you recognise them please call us on."