Share this...
Our warning after tangled hedgehog is found suffocating in netting

Our warning after tangled hedgehog is found suffocating in netting

We¿re urging people to put sports netting away after a hedgehog was left suffocating when he became tangled in one in a garden in Birmingham.

Putting sports netting away at night could save lives 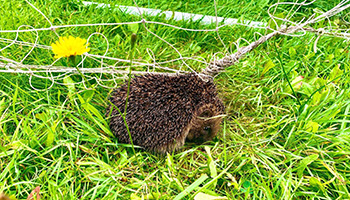 Our Animal Collection Officer (ACO), Cara Gibbon, was called to rescue the hedgehog from a football net in a garden in Albert Road, Stechford.

The netting was caught tightly around the front of the hedgehog¿s body and he was slowly suffocating, but thankfully Cara managed to carefully cut him free with scissors. Cara said:

The netting was tight around the hedgehog and as he tried to free himself it was getting tighter and he was suffocating and really struggling to breathe.

This is such a stressful situation for an animal, particularly a wild animal, to find themselves in.

We understand that many people are not aware that netting used to fence off areas and netting used for gardening or in sport can be really dangerous for animals - we¿re trying to raise awareness of this.

We would urge those using netting for sports to remove and store all nets after their game and put any discarded or old netting safely in a bin. Any garden netting, such as pond netting, should be replaced with solid metal mesh.

The hedgehog was taken to a wildlife centre 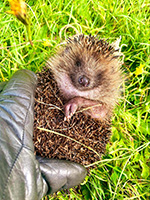 Sadly, a few days later an independent vet decided due to the serious injuries he had sustained, the kindest thing was to put him to sleep to end his suffering.

Although this time there wasn¿t a happy ending, I¿m grateful that the homeowner spotted the distressed hedgehog and reported the matter to us so that he didn¿t suffer a lingering death.

The householder, like many members of the public, had no idea the netting would pose a risk to wildlife and were obviously saddened by the incident but are keen for us to help raise awareness of the issue.

We receive hundreds of calls every year to rescue animals - often wildlife - who have become tangled in netting used in gardens or sports netting.

More information about how to help hedgehogs in your garden.

If you do encounter a wild animal you think needs help, please call our 24-hour emergency line on 0300 1234 999 or report the incident online.