You've goat to be kidding!

You've goat to be kidding!

We were called to help rescue a goat that was stuck on a 50 metre cliff edge in a Durham quarry. 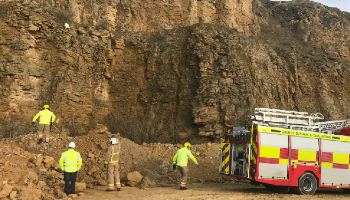 We attended on Wednesday (20 January) with fire services, after we were called by a member of the public who spotted the goat on Raisby Quarry in Coxhoe, County Durham. But with light fading fast we realised it would be unsafe to act and would have to return again in the morning.

Inspector Terri-Ann Fannon attended the next morning  (Thursday 21 January) with a team from Newton Aycliffe Fire and Rescue Service and tried again to rescue the goat who had been stuck on the ledge for two days.

We knew he couldn't be left there for much longer

This goat was stuck on a cliff ledge about halfway up a 50 metre cliff. It was pouring with rain and the poor goat appeared to be getting more and more tired. We tried absolutely everything to bring the goat to safety and knew he couldn't be left there for much longer. Eventually we were able to carefully use the fire hose to spray water just below the goat to gently encourage him to move and coax him to safety. Goats are excellent climbers and so we knew if he could be encouraged he'd be able to climb back up the cliff himself. Thankfully, he jumped all the way back up the cliff and onto a safer ledge.

This isn't the first time we've rescued a goat which was kidding around on the cliffs at the quarry but thankfully we're on hand to rescue them when they need us and we're very grateful for the assistance of the fire services.

Throughout the winter months, we expect to rescue thousands of animals from neglect, cruelty and suffering. Already this winter, we've received more than 82,000 calls but the calls to our rescue line are not stopping so neither will we. To help our rescue teams continue to reach the animals who desperately need us, donate online and Join the Winter Rescue #JoinTheRescue