Woman who tried to drown dog in river sentenced by court

A woman who attempted to drown her dog in the River Trent has been sentenced in court after pleading guilty to causing unnecessary suffering to the pet. 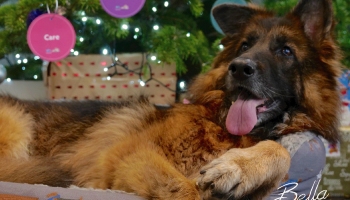 Bella, a German Shepherd-type dog, was rescued from the River Trent near Long Lane, Farndon, on January 6 last year when a passer-by saw her struggling and submerged in the water after she was left to drown.

Member of the public Jane Harper managed to free the dying pet whose lead was attached to a carrier bag and tied to a large rock under the water.

The dog was rushed for emergency veterinary treatment and it was there that Bella's microchip was found which was registered in 2010, and gave her name and owner's details as Ms Latham.

Latham was arrested by police and today at Nottingham Magistrates' Court. Latham, of Ilfracombe, Devon, was sentenced to a 12 months community ordered after she pleaded guilty to causing unnecessary suffering to Bella by attempting to drown her. 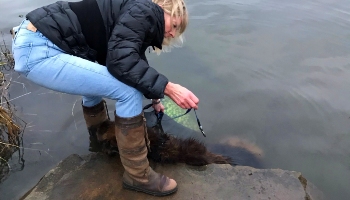 The members of the public who rescued Bella reported the matter to Nottinghamshire Police who took the dog to a local vet for emergency treatment.

Bella was then transferred into the care of our Radcliffe Animal Centre in Nottingham while we, along with the police, launched an investigation.

Bella, aged 11, has remained at the centre ever since as she has complex veterinary needs but she has been completely transformed from the dog who almost didn't make it to the bouncy elderly girl she is now.

A vet who examined Bella after she was pulled from the river said had she not been treated when she was then she would've died.

"Bella was in a suffering state when presented to me on January 6. This is because she was severely hypoglycemic, hypothermic and trembling to the point where she could not stand. If she hadn't been treated at this stage it's likely she would have died."

Bella looking for a home near our Radcliffe centre

Ella Carpenter, our manager at Radcliffe Animal Centre, said after the case that they're now desperate to find Bella a loving new home.

"We're both proud and privileged to have cared for Bella over the past fourteen months.

"At times we thought she just wouldn't make it, with her age and underlying health conditions all against her. But Bella has fought every day, showing enviable strength and courage, not wanting to give up her fight to recover.

"We hope that she'll now be able to live out the rest of her life with the love and respect that she has always deserved and are looking for that special forever home for Bella."

Ella added that any new home for Bella would need to be in the vicinity of our Radcliffe centre.

"We're appealing ideally for a local home for Bella so that we may assist in supporting her ongoing care due to the complexity of her needs.

"Bella has a number of underlying health issues which do need careful management under veterinary supervision. She can sometimes be challenging to care for and recognising when she feels well or not will take time in getting to know her.

"Her new owners must have the financial ability to support her veterinary care when our centre is closed as it is unlikely she will be able to be insured for any of her existing conditions.

"Her new owners should have experience of large breed dogs, ideally owning German Shepherds before and have no other pets.

"She will need a very secure garden. She does not like to be around other dogs and is reactive and unsettled in their presence.

"Bella's new owners must feel emotionally able to cope with her deterioration over time and inevitable passing when the time comes."

Latham pleaded guilty to causing unnecessary suffering to a protected animal, namely Bella, by attempting to drown the dog resulting in the animal being immersed in the cold water of the River Trent for a prolonged period.

As well as a 12-month community order Latham was fined £80, was ordered to pay £200 costs and a £32 victim surcharge. She was also disqualified from keeping dogs for three years.