To mark World Rat Day (Sunday 4 April) we're highlighting just how social and intelligent these rodents are and why these commonly misunderstood pets would hate social distancing. 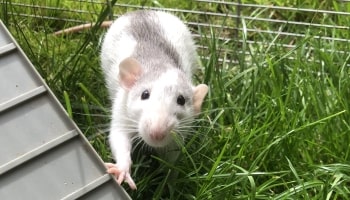 There were more than 200 incidents reported to us about domestic rats in 2020 (221), this includes rats that have been neglected, abused, injured and abandoned, and were in need of help.

In 2020, our nine national centres rehomed 60 rats however the overall figure is likely to be much higher as this does not include our 150 branches which rehome lots of rats every year. Despite this, sadly there are still some common misconceptions about these intelligent and friendly pets.

From heroes in war zones to life-saving buddies 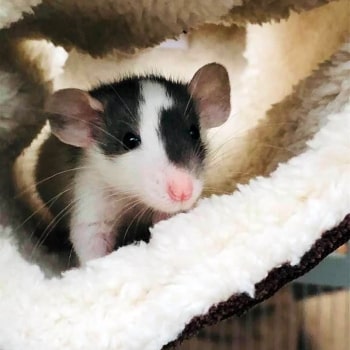 "Rats are incredibly intelligent animals who can be trained to count, fetch a ball and high-five a human! Some rats have even been trained to safely locate landmines in war zones so that they can be removed. They really are an extraordinary group of animals and much more intelligent than they are often given credit for.

"They're also very social animals who thrive off the company of other rats - they would absolutely hate social distancing! They use their incredible sense of smell to recognise other rats and this can help them find out information about each other, such as where they have been and what they have been doing. Being such social animals who rely on the companionship of other rats, keeping them on their own can cause stress and anxiety for them which I think we can all relate to after the last 13 months of lockdowns."

Studies suggest that rats are empathetic towards each other and choose to release a fellow rat who is trapped in a tube rather than enjoy a treat themselves. This shows how they interact with one another and develop strong relationships with their friends.

"Rats can make really great pets as they're friendly and enjoy human company. Owners can teach them tricks to keep them stimulated and engaged and can also enjoy having some relaxing time with them on the sofa. I think many people would be surprised by how friendly pets rats can actually be!"

Rat owners and their incredible bond

Two rat owners highlight the incredible bond they have with their pets: 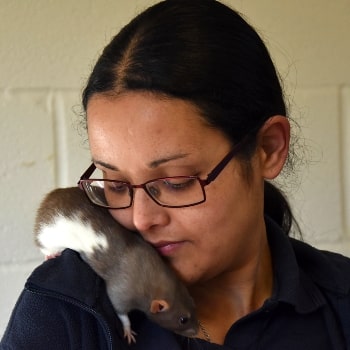 For Erin Awon, our animal care assistant at West Hatch Animal Centre in Somerset, rats are her obsession after caring for around 15 rats in the last six years.

She now has three female rats called Athena, Cordelia and Sumia, who she adopted from our Little Valley in Exeter in February 2020. She adopted her furry friends just before the pandemic began so her pets have become a real source of comfort over the last year.

"My three girls are absolutely lovely! They're so interactive and just love being with you. They always rush out of their bed to come and greet me when I come to their cage. Rats are my obsession! They mean everything to me. I'd spend all my money on them if I could!

"I had to make sure they had the biggest cage so they currently have two big adjoining cages which take up a quarter of the room!"

Erin's love for rats came from her work

Erin has worked for our West Hatch branch for seven and a half years and started her career as a volunteer at the centre.

When I volunteered, I would love sitting with the rats and as I learnt more about them, I just fell in love instantly. 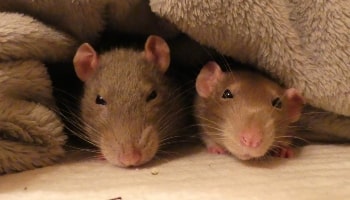 She had her first rats in 2015, usually taking home the most poorly and elderly rats so there has been some heartbreak along the way. Her three pet rats are now 18-months-old and came into our care as their owner could no longer care for them. They hadn't been handled properly so they were very skittish at first but with some patience (and a treat or two!) Erin soon found that they came out of their shells quickly.

"Rats are sociable and friendly pets. I don't think everyone realises that. They are interested in you and they just want to be around you. They are also so clever and pick-up things really quickly and they never forget anything I¿ve taught them. My girls have amazing recall, they know a few tricks such as pulling on a string, ringing a bell and I did try to teach them fetch - but we¿re still working on that!"

As part of her job with us, Erin helps give advice to prospective rat owners to make sure they have done their research and know what becoming a 'rat buddy' really entails. Erin says the most important thing a rat owner should know is that just because they're small, that doesn't mean they're cheap 'throwaway' pets.

Their lifespan may be shorter than that of a cat or dog but they still deserve the same level of care if they become injured or sick. It's important that any new owner is prepared to pay for any potential vet visits and treatments they may need throughout their lives.

Charlotte and her rat-fearing mum 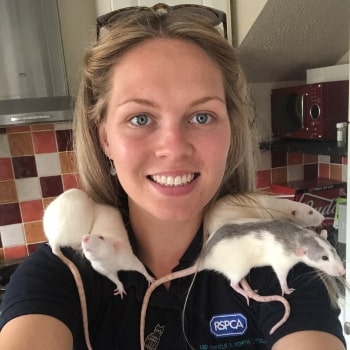 Charlotte Blyth from Norfolk never imagined she would have pet rats, not least of all because her mum Amy has a crippling fear of them. However, in April 2020 after 17 rats came into our care from one household, Charlotte found herself fostering three of the female rats.

Charlotte, who works as an animal welfare officer at our Mid-Norfolk and North Suffolk branch, was fostering the three females when it soon became clear that one of the girls was pregnant. Within two days of the pregnancy being confirmed, she gave birth to ten babies! Charlotte fostered all 13 rats until they could be rehomed but four of the girls - Oslo, Sofia, Victoria and Lima - stole her heart and she adopted them in May 2020.

"I never thought I wanted pet rats. Now, I could never imagine my life without them!

"They're such clever little characters who enjoy a snuggle, enjoy exploring, and love spending time fishing for peas or digging in their digging box. They can be trained to do tricks and are super clean animals who can even use litter trays. Throughout the day, my four girls spend the majority of their time asleep in their hammocks curled up together and in the evening they come out and explore, run around and play with their toys.

¿As they've been handled from a fairly young age, they're really used to people. I was able to gently handle them once they were more than a week old, with their mum's permission of course!
I¿ve been working from home during the lockdown and their cage is next to my desk so it's been nice to have them for company. Every time I have food, you will just see four eager faces appear at the front of the cage!"

Are rats the marmite of pets? 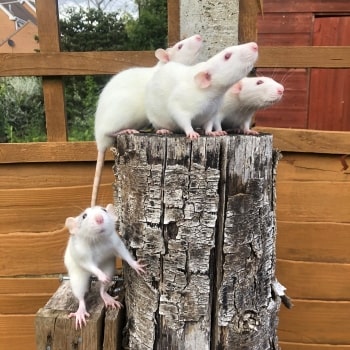 Charlotte said it saddens her now to know what a bad reputation rats have and she was determined that her mum would overcome her phobia. Once the first lockdown ended and some restrictions were lifted, Charlotte could introduce her terrified mum to her four rats.

"In the first lockdown when I said I was fostering them she didn't mind too much because it wasn't like she could come over anyway but then I told her I'd adopted them and she'd basically have to face her fear or never come round again. I encouraged her to touch their tails so she knew they weren't slimy or dirty. She's even had them on her lap! The problem was she had this horrible fear of rats but she'd never actually met a rat in real life, it was all based on what she'd seen on TV!

"I think they are kind of like marmite, some people either absolutely love them or absolutely hate them but they're just misunderstood. They're fantastic to watch and are friendly characters with individual personalities who bring so much love and joy to my home. I would encourage everyone to adopt pet rats - you'll not be disappointed!"

Handling rats is good for them

Charlotte's top tip is getting them out and handling them every single day for their own enrichment but also so they become sociable and friendly. Rats who have had little interaction can become shy and wary of people. Charlotte explains when it comes to being a rat owner, you get back what you put in.

For more information about caring for rats see our pet rat advice pages and rat factfile.

To adopt a rescue rat, visit find a pet.