This World Day for Animals in Laboratories (24 April), we're calling for scientific experiments on decapod crustaceans (like crabs and lobsters) to be regulated in the same way as experiments on mice, rats and fish.

New groundbreaking evidence that decapods are sentient (able to experience pain and distress) makes it morally wrong to exclude them from the law controlling lab animal use.

The Animals (Scientific Procedures) Act 1986 does not cover decapod use for scientific purposes. This means that no licences, or training, are required before they can be used in procedures causing pain, suffering or distress.

Decapod crustaceans include crabs, lobsters, crayfish and shrimps - they are regularly used for research and teaching but the true numbers remain unknown as they are not covered by the Act. 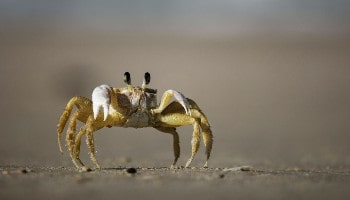 Last year, a Government-sponsored review conducted by the London School of Economics (LSE) concluded that decapods are sentient, meaning they can experience pain and distress.

As a result, decapods are now included in the new Animal Welfare (Sentience) Bill, as well as animals with backbones (vertebrates) and cephalopods (eg. octopuses and squid).

However, the ASPA is a different piece of legislation, which permits harm to animals for scientific purposes. Unlike vertebrates and cephalopods, decapod use in science is not regulated by ASPA.

This means that they can be caused pain and distress without any regulation or statutory oversight, and can be housed in environments which may not meet their basic welfare needs.

The LSE report specifically recommends that decapod use is regulated by the ASPA.

It would be unthinkable to cause pain, suffering or distress to a mouse, rat or fish in a laboratory without proper regulation and ethical review. We have always been assured that invertebrates, like decapods, would be added to the ASPA if there was enough evidence that they were sentient. The evidence has been collected, and octopuses are already included - the time to regulate decapod use is now.

This change would mean the people using and caring for decapods would have to be properly trained, and housing would need to meet their needs.

Scientists using decapods would have to apply to the Home Office for a licence, as is already the case for research using vertebrates or cephalopods.

"Decapods are recognised as sentient beings in both science and law. It is clear that these fascinating animals should receive the same protections in UK animal welfare legislation as other sentient species," said Claire Howard, executive director of Crustacean Compassion.

"The use of decapods in research and testing should be subject to a thorough, well-informed animal welfare and ethical review process.

"We look forward to working together with the RSPCA, research community and policymakers to achieve this. The evidence is compelling and the public mandate is clear, decapods must be included within the Animals (Scientific Procedures) Act without delay."