A staggering 20 puppies were found abandoned in a crate on a layby near Fryerning, Essex, on Friday (29 July). 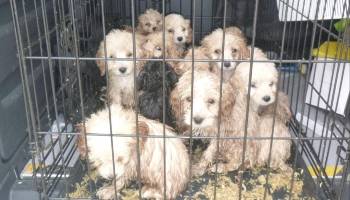 The puppies were all inside a crate and were found by a kind-hearted member of the public who was walking in the Blackmore area on Friday at around 3pm. The incident comes as the RSPCA launches its Cancel Out Cruelty fundraising campaign to help our frontline teams save more animals during the busy summer months.

The finder called the RSPCA and Inspector Sian Ridley and Animal Rescue Officer Enola Evans attended the call and discovered the small puppies shut in the metal crate.

They collected the pups and took them straight to a local vet for treatment. One of the puppies was very weak and was being kept warm by a member of the public when the officers arrived.

The female pup was handed to Enola who kept her warm and safe on the journey to the vet - but sadly the puppy was too weak and the vet made the difficult decision to put her to sleep to prevent her suffering further.

The surviving pups were small and each weighed less than a bag of sugar - there were 14 males and five females. It's believed they're from two or possibly more separate litters. Staff aren't yet sure what breed they are but it's thought that the slightly larger pups are possibly cockapoo or poodle crosses and the smaller ones are thought to be jackapoos.

There was a concern they may have contracted parvovirus - but early indications suggest they're all clear. The pups were all in reasonable health and have been given fluids with glucose over the weekend. Sian said:

When I was told how many puppies there were I actually thought there was a mistake - I couldn't believe that someone had abandoned 20 puppies!

They were all quite scared and timid when we arrived and it was just heartbreaking to see them all huddled in the one cage - they looked a pitiful sight.

I want to say a huge thank you to all the passersby who stayed to help these pups and also to the vet who were able to take on the care of pups over a weekend at such short notice.

It's difficult to know where these have come from. I suspect that they may have come from a puppy farm but they were friendly, clean and didn't have fleas so they may not have been kept in a shed without human contact.

It's also unusual that such a large number of the pups are male and I wonder if that was the reason they had been abandoned because they wouldn't be useful for breeding or are harder to sell on.

We were concerned they may have had parvo and this was the reason they had been abandoned but that's not the case and apart from some having worms they all appear to be quite healthy.

I'm keen to hear from anyone who may know who is responsible for abandoning these puppies in such an irresponsible way. They were so young and vulnerable - it's likely that someone just drove up in the layby, got them out of the car and then just left them. I am keen to speak to anyone who may have seen a suspicious vehicle in the area on Friday.

Times are tough at the moment, but abandoning tiny puppies like this is so irresponsible and cruel. Please never abandon your pet but ask for help before things get so desperate.

The RSPCA is incredibly concerned about the number of abandoned animals the team is being called out to and fears the cost of living crisis could be leading owners to make difficult decisions. The charity's groundbreaking report - the Animal Kindness Index - found that 68% were concerned that the cost of caring for pets was increasing, while 19% were worried about how they would afford to feed their pets.

Read more: Eight tips to save money while still caring for your pet.

Anyone who saw anything suspicious in the area or has any information that could assist the RSPCA's investigation should contact the charity's appeal line, confidentially, on 0300 123 8018. 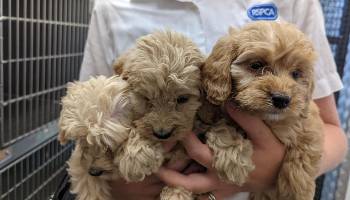 Some of the pups have already been offered homes by the dedicated staff at the vet who are caring for them and all are currently in foster care. Please don't call any centres at the moment regarding rehoming as the pups will still need some additional care as you could stop an emergency call from getting through.

This is just one example of the heartbreaking cruelty the RSPCA deals with daily. The RSPCA sees a rise in animal cruelty over the summer months with 245 reports of cruelty every day.

Our frontline teams will be working hard to rescue animals in need this busy summer but we need your help to save animals from abuse and Cancel Out Cruelty for good.