Trio of kittens dumped at supermarket in the West Midlands

Trio of kittens dumped at supermarket in the West Midlands

The RSPCA has condemned the "callous" person who dumped three kittens at the back of an Asda supermarket in Brierley Hill. 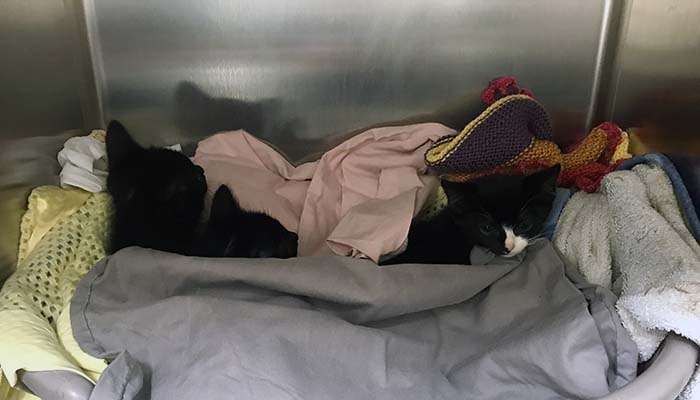 The kittens - aged about ten-weeks-old - were discovered near the Pearson Street store by a member of the public on Monday morning (8 November) after they had been left in a cage behind some bins.

They were collected by RSPCA inspector Claire Daley and are now being cared for at the charity's animal centre in Birmingham.

"Apart from needing treatment for fleas, they don't have any other health issues, and will no doubt recover well from their ordeal with a little TLC."

"It was extremely callous to dump them when there are many organisations who can offer support with rehoming, and we would like to hear from anyone who knows anything about this incident or who the kittens belonged to. Our inspectorate appeal line can be reached on 0300 123 8018."

"Incidents like this highlight, yet again, the importance of getting kittens and female cats neutered."

The charity's centres and branches are caring for more felines than any pet, with nearly 3,000 coming into the Society¿s care during the first eight months of this year.

We're seeing lots of cats coming into our care at the moment. This could be due to the end of the kitten season when most cats are born, or more worryingly, it could be as a result of people buying cats on impulse earlier in the year who are now struggling to cope with them.

There's been a huge surge in pet ownership during the past year or so and whilst it's positive that so many people want to take on a pet, we are keen to highlight the importance of doing your research to ensure you¿ve got the time, patience and money to care for that animal for the rest of its life.

The RSPCA believes that neutering cats from four months old will help to reduce the amount of unwanted and unexpected litters of kittens that are born and sadly end up in rescue centres.