Tributes have been paid to one of our much-loved animal rescuers who was well known because of his family connection stretching back more than 150 years over two generations.

Bruce Oxley, 78, of Church Town, Southport, spent 30 years in the area where he lived rescuing thousands of animals in need. He was one of three brothers who joined the RSPCA - all following in the footsteps of their father and uncle.

Bruce joined the charity in 1970 along with his younger brother, John, followed a few months later in January 1971 by his eldest brother Brian.

They followed in the footsteps of their father Frank Oxley senior, who joined the RSPCA in 1932 (retiring in 1968, after 36 years of service) and his brother, William, who joined in 1929 (and served until his death in 1958). 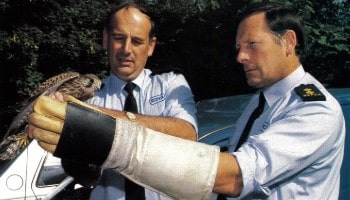 It really was a family calling for the brothers, who grew up in North Yorkshire, where their dad was an inspector and was a familiar sight in the Bridlington area with his motorbike and side-car. If a dog or cat was injured the stricken animal would be whisked away in his side-car for treatment.

In a magazine article for the RSPCA in 1992, the brothers told how they were "born and bred into the job" and recalled people would call at the family home at all hours with injured animals.

The trio - as well as mum Gladys - did their bit to help and would even accompany their dad when needed in helping injured animals.

In the article Bruce told how his most powerful memory is of a stray Alsatian dog which had burrowed her way into a sandbank to give birth, and then got stuck. Delicate digging skills and wooden struts to prop up the sides of the sandbank were needed to pull mum and her four pups to safety. The sandy dogs were all later rehomed.

Bruce made his friends and family proud

Bruce spent most of his career in the Southport area and the brothers' connections to the North remained as John was the inspector in Liverpool followed by Manchester, before he moved on to North Yorkshire and Brian was an inspector for the Bury area.

During his career, Bruce received six commendations - with the first being in 1970, the year he joined the RSPCA. He also received a Certificate of Merit. His wife Betty, 73, said she was fiercely proud of his work rescuing animals and the people he served.

Bruce was an animal lover as he was brought up around them and we always had rescue dogs as pets. He loved his job because he was able to help save animals and was also pleased to serve the people he met along the way who often needed help and advice.

Even in his retirement Bruce still had a passion for helping animals and, just two years ago, he told the RSPCA how he rescued a sheep which had become trapped in a cattle grid.

He said at the time: "We were on our way to a Land Rover Experience day near Skipton when we came across a sheep which had got itself in the middle of a cattle grid.

"With the help of my friend, we managed to stand on the grid which had round bars which were wet and slippery, very difficult to stand on.  With difficulty we managed to lift and turn the sheep in three attempts. 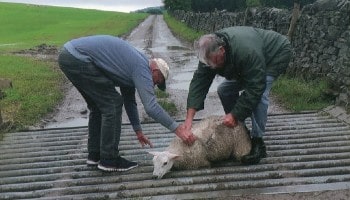 "Suspecting it to have injured itself, great care was needed, all still trying to balance on the grid bars. Luckily the sheep was not injured and was returned to the field.

Inspector Paul Heaton who works in our Greater Manchester group recalls how Bruce helped him during his training days. He said: "Bruce was such a gentleman. I remember him when I had only been in the RSPCA a short time, and he took me under his wing and offered advice and was always so encouraging. He really helped me learn the job.

"I always remember meeting him for the first time at a hare-coursing event, which is thankfully now illegal, and afterwards he asked if I had lunch with me or a drink and I didn't. So he produced an extra flask and some spare butties - he said he always took more just in case - he was a really thoughtful person.

"Since that day I have always made sure I take a flask with me in my van - and am always grateful for the support I was given during the early days of my career."

Bruce died following a short illness at his home. His funeral service took place on November 2 at Southport Crematorium.

As well as his wife, Betty, he also leaves behind his son Peter, 50, and grandchildren Hannah, 21, and Cameron, 18, who also grew up with rescue dogs.