null We look back at top rescues of 2020

While 2020 felt like a difficult year, it hasn't all been doom and gloom. Our animals have provided comfort, joy and happiness while we endured lockdown uncertainty.

As well as the companionship of our wonderful pets, animals have also provided us with some laughs, including those who got themselves into a-moo-sing situations and needed a helping paw from our rescue teams. Animals do the funniest things!

So, just to cheer you up after this challenging year, here are 20 of our funniest animal rescues during 2020:

A cockapoo puppy ended up in a pickle after getting wedged under a reclining chair! The eight-week-old pup - nicknamed Pudding by his rescuers - had crawled under the sofa and got his fur caught. Inspector Hannah Nixon was called to the home in Portsmouth on 27 October and Hampshire Fire and Rescue Service came to help to remove the electrics and cut Pudding free unharmed.

A newborn calf was lucky to be saved after getting stuck neck-high in mud in a boggy pond. Inspector Ryan King was called to Rochdale, Greater Manchester, on 31 May after a tram driver spotted him and feared he might drown. Ryan waded into the mud, got a towel under the calf's nose to keep his head above the mud, wrapped a towel around him like a sling, pulled him free and carried him out. 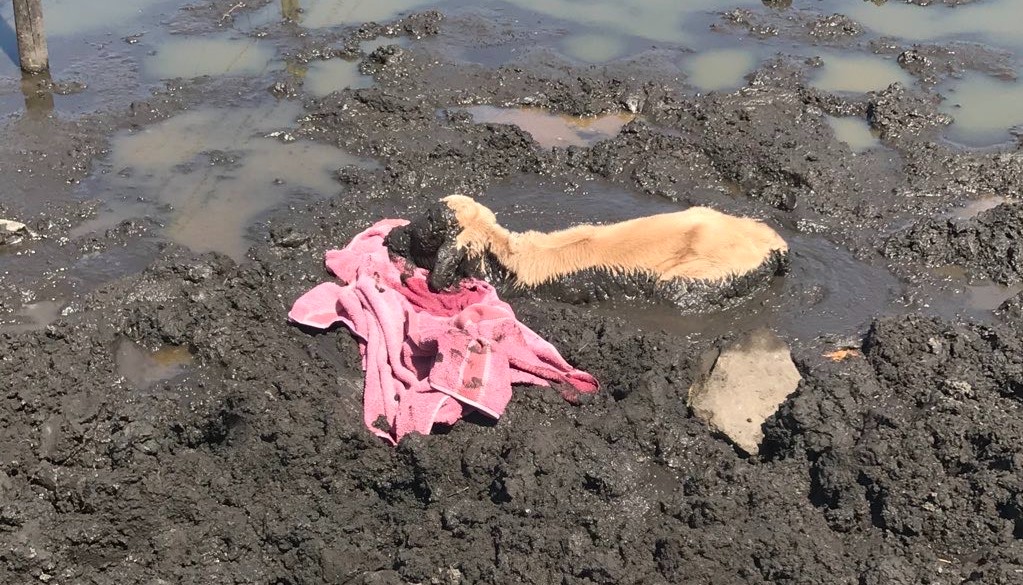 Rescuers from the RSPCA, fire service and local farmers launched a four-hour mission to save a lamb who fell through a broken manhole cover and got stuck in an underground pipe. RSPCA officer Emily Welch rushed to a field in Durham on 3 May to help the lamb. Using a digger, they dug down to the cold, bleating lamb and pulled him free to run back to his mum.

Rescuers were called to Sevenoaks, Kent, on 14 April to help a fox cub who'd got a watering can stuck on his head! Officer Lynn White said: "This poor fox had probably got stuck while he was trying to get some water out of the can." She used some Vaseline to lubricate his neck and pull him free.

Workers at a gym equipment warehouse in Llanelli, Wales, were stunned to find a grey seal pup amongst the treadmills when they arrived at work on 11 December. It's believed he travelled up the River Loughor before making his way into the warehouse. Staff ushered him back into the river but he was found, two days later, in a ditch in Llangennech. RSPCA Inspector Leigh Summers collected the sick pup and took him to our wildlife centre nearby.

A little frog needed help after getting stuck in a drain cover in the Wirral, Merseyside. Inspector Leanne Cragg was called on 8 September after a woman found the frog stuck in the grate. She said: "I've heard of toad in the hole - but this is my first frog in a drain!" She took him to the local fire station where officers cut him free and Leanne returned him to the pond to join his froggy friends. 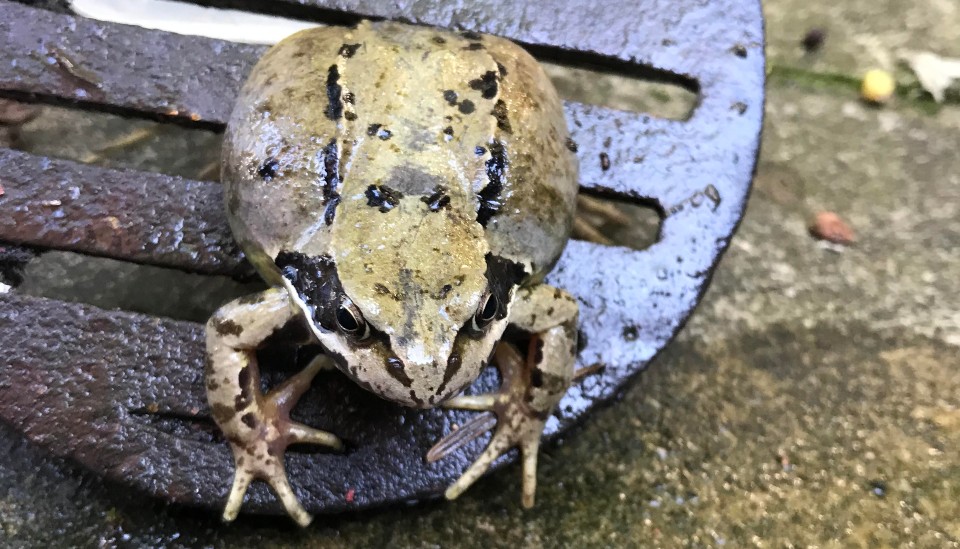 A lost billy goat needed help after being found at a bus stop in Bradford, West Yorkshire! He'd been causing quite a stir in the town when officers were called to help him on 10 June. Inspector Emily Stodart said: "It's certainly not something you see every day!" Officers caught him and took him to a nearby yard for boarding.

A stallion needed a helping hand after getting stuck on a gate while trying to reach his neigh-bours! A walker spotted the stricken horse and rescuer Jack Curran was called to the paddock in Loughborough, Leicestershire, on 24 June. He managed to track down the pony's owner and, together, they helped him over the gate and led him back into his own field.

When a man heard scrabbling in his kitchen on 30 September he was shocked to find a squirrel stuck in the back of his fridge. Inspector Emily Buckett was called to the house in Wimbledon, London, to help the stricken rodent. She said: "We moved the fridge outside and unscrewed the back. As soon as we removed the back he popped out and dashed off, very pleased to be free!"

A foiled fox was freed from a fix after he was discovered with his head stuck in a wheelchair lift in Oxford. Inspector Andy Eddy was called out on 13 September. He said: "The poor fox was distressed and exhausted from struggling to escape with no success. I think he must have tried to jump up through a glass plate to the top level and bounced back and had fallen with his head down the edge of the side rail." He lifted him out and took him to a local wildlife hospital for treatment for a swollen throat before being released back into the wild.

A gas meter reader was in for an unexpected sssssssurprise after finding a snake wrapped around the pipes in a meter box in Gosport, Hampshire. The shocked worker contacted us on 25 November and Inspector Hannah Nixon went to catch the corn snake, believed to be an escaped pet, and took him into care.

A rescuer had to get clever to rescue a rat which had got stuck inside a car wheel. Inspector Jaqui Miller was called to Gateshead, Tyne and Wear, on 24 July to the stricken rat. She jacked up the car and used a towel to push up one side of the coil in order to create some space and grab the rat. "She wasn't injured so I was able to free her there and then and she scurried back off to safety," she said.

A tawny owl needed help after getting stuck inside a fireplace. Inspector Lauren Bailey was called to a home in Ewelme, Oxfordshire, on 25 April after a family heard noises coming from their chimney. She said: "The family had been hearing noises from the chimney and fireplace for a few days but had no idea there was a bird trapped inside until he fell all the way to the bottom. The first they realised was when they saw him peering out through the fireguard - he had his feet up against the grill like he was waving and asking for help!" She removed the grill, caught the bird and took him to a wildlife hospital to recover. 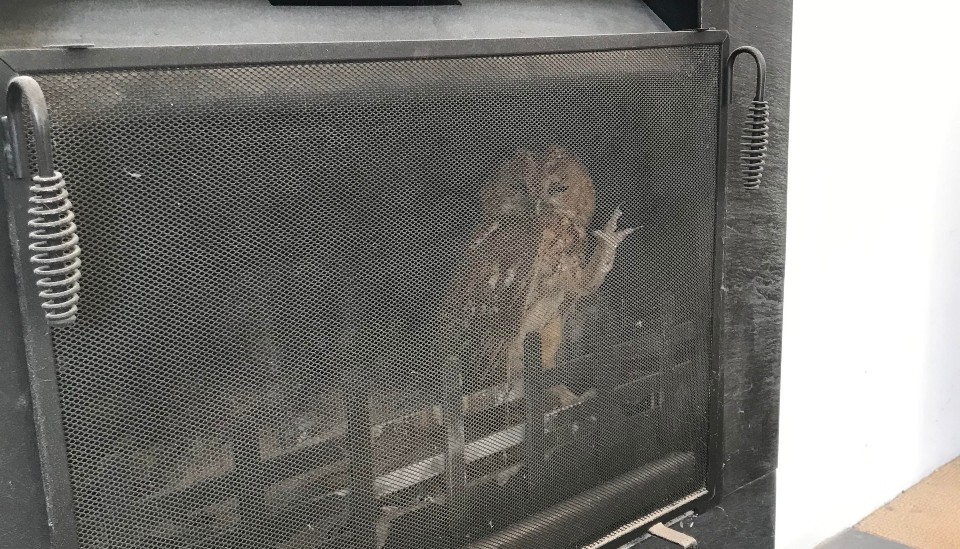 A badger needed a bit of help after getting his bottom wedged in a garden fence in Goddington, Kent. A concerned householder called us for help on 12 November after realising the wild animal was stuck fast in his fence. Chief Inspector Mark Miles said: "It looks as if he was trying to get from one garden to the next via the hole in the fence, but had misjudged the width of his backside." They widened the gap, wiggled him free and set him loose.

A ewe felt rather sheepish after getting stuck in an embaa-rassing position in a metal feeder. Rescuer Emily Welch was called to the field, on the outskirts of Richmond, Surrey, on 26 February, after a passerby spotted the sheep's predicament! She said: "I suspect she was being a little greedy and pushed through the rest of the flock to get to the tasty hay and got herself trapped." Emily climbed in and carefully pushed the ewe free.

A tawny owl felt like a right twit-twoo after getting stuck between glass doors and a Juliet balcony. Inspector Gemma Fowler was called to the home in Bradford, West Yorkshire, on H-owl-oween after the residents spotted the bird in a fix. Thankfully, the owl wasn't injured so Gemma lifted him out of the gap and released him off of the balcony and back into the night.

A greedy hedgehog ended up in a prickle after crawling inside a discarded bird feeder in search of food - and getting stuck. Inspector Tony Woodley went to Horsham, West Sussex, to help the poor hog on 10 April. He cut the wire, received a section of the feeder, peeled it back and he was able to squeeze out and wander back into the undergrowth.

An RSPCA officer used washing up liquid to rescue a muntjac deer trapped in a metal gate in Sutton Coldfield, West Midlands, on 26 February. Catherine Strawford found the frightened deer surrounded by dried blood and covered in cuts and grazes from struggling to free himself. She poured washing up liquid over him and carefully squeezed him free, checked him over and released him. 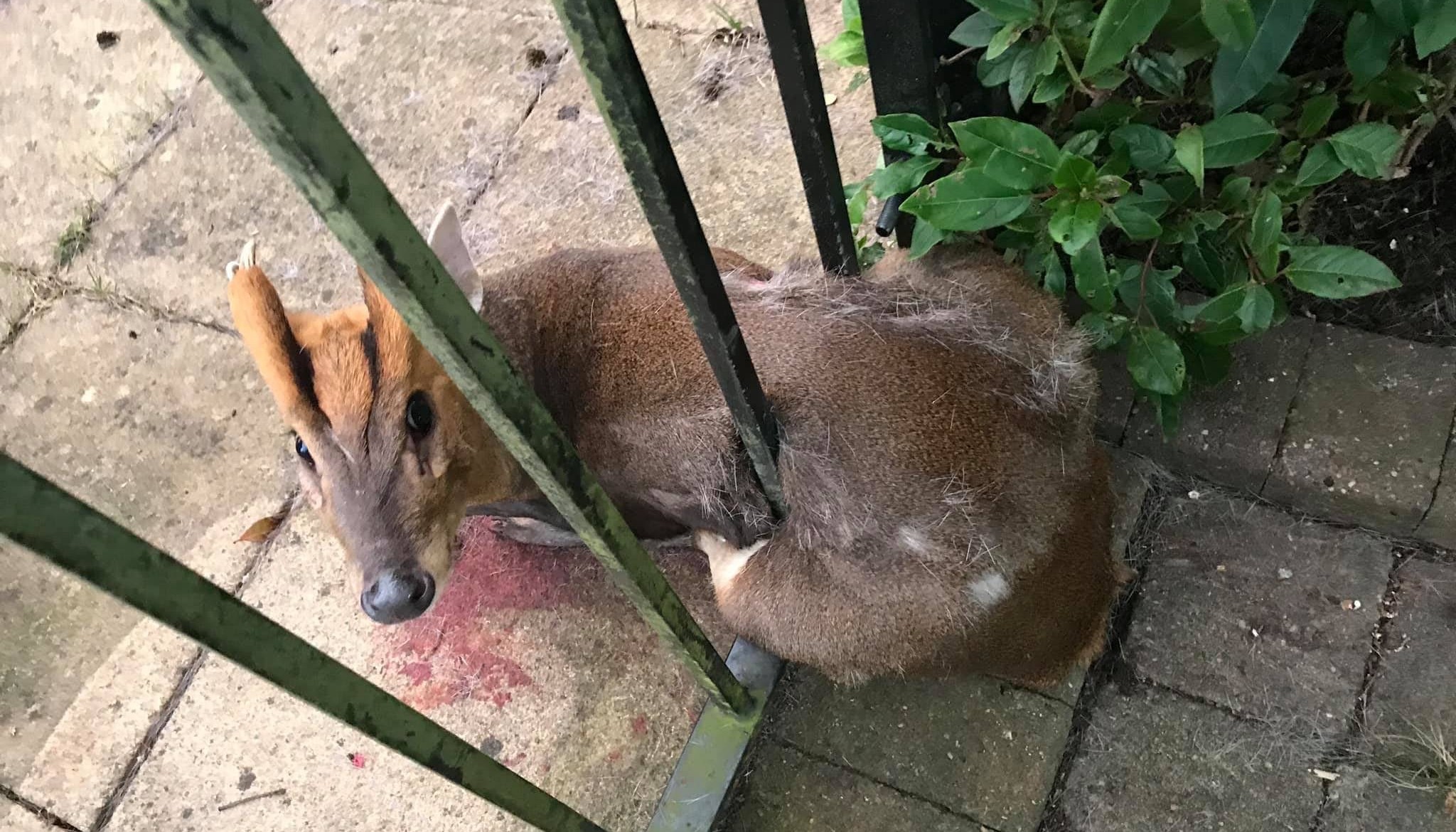 A podgy hedgehog had to be 'chiselled' out of a tiny gap where he'd got stuck between a tree and a concrete pillar in Blackpool, Lancashire. Inspector Will Lamping was called to the garden on 17 July after a woman was alerted to his plight by her dog. The landlord was a joiner so they chiselled at the tree to widen the gap and carefully lift the hog out. Nicknamed Sonic, by the caller, he was taken to a vet for a check-up and released back into the garden a few days later.

A couple had a ssssshock when they went to fix their faulty tumble dryer and found a 4ft snake hiding behind it! The Royal Python was found in the utility room of their Southport home, in Merseyside, on 20 December. Officer David Hatton went to collect the snake - believed to be an escaped pet - and took him into specialist care.