An elderly woman is said to have been lucky to escape a serious injury after a swan crash-landed through a double glazed window - just moments after she left the room. 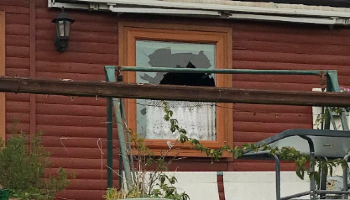 The bizarre incident happened when a flying swan hit the bathroom window of a chalet home in Shamrock Lodge, Barton in Fabis, in Nottinghamshire.

The impact caused the glass to smash a double-glazed window and the swan ended up cut and dazed on the bathroom floor.

The elderly woman had been at the sink in front of the window just moments before - luckily she had moved or it's thought the impact of such a large bird hitting her at speed could have caused serious injury.

Just as she left the room she heard a loud crash and when she went to investigate she was shocked to find a shattered window and the bloodied swan on her bathroom floor.

A neighbour who heard the commotion from the incident, which happened at about 8am on Monday, 11 January, went to help the elderly woman and reported the matter to us.

Animal rescuer Inspector Keith Ellis was sent to the scene to collect the injured female bird and she was taken for emergency veterinary treatment.

The lady was so lucky when this happened as she'd just been in the bathroom - had she still been there when this swan crashed through the window I'm sure the glass shattering and the impact of the bird hitting her would have caused serious injury - or even worse.

I think the swan was looking and flying to the nearby River Trent and must have misjudged the direction. It was also quite windy at the time which may have blown her off course.

I've been an RSPCA inspector for 40 years and have never seen a swan crash through a window.

I've seen them crash-land onto busy roads thinking they are rivers - but nothing like this - it's so bizarre.

She'll soon be able to return to the wild 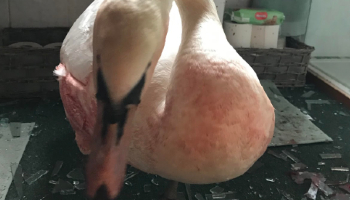 The swan was taken to a nearby vet's where she spent over an hour in surgery.

She was then transferred to our Stapeley Grange Wildlife Centre, near Nantwich, Cheshire, where she'll be treated for her wounds and rehabilitated until she's healthy enough to be released back into the wild.

She was a bit dazed when I went to collect her and had lost a lot of blood but we managed to get her to the vets quickly and she spent an hour in surgery having dozens of stitches to a wound under her wing.

She'll receive further treatment at Stapeley Grange and hopefully she'll soon be able to return to the wild.

Find out more information on what to do if you find an injured wild animal.