A tiny gliding possum has been rescued after swooping into a stranger's bedroom!

Shocked John Zou, 27, was sleeping when he heard the noise of something scampering around his bedroom in his sixth-floor flat at around 5am on Monday morning (10 January).

He said: "I was asleep and woke up to the noise of something running around the bedroom. I was scared it might be a rat but when I went to investigate I found this little creature.

"I didn't know it was a sugar glider so I sent photos to some friends and they helped me to identify it." 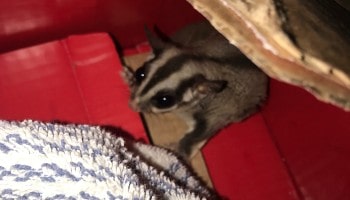 John shut the little possum in one of his rooms to keep him safe and contacted us for help.

Sugar gliders are small, nocturnal gliding possums, native to Australia, New Guinea and parts of Indonesia. Their name refers to their love of sugary foods and their ability to glide from tree to tree.

John added: "I left the window open to the balcony so he must have come in from outside. I guess he's someone's pet and flew into my flat from theirs. I put some messages through the letterboxes of my neighbours but wasn't able to find his owner so he could have come from further afield."

Sugar gliders may be cute but they aren't suitable pets

Sugar gliders look incredibly cute and this little guy is adorable. It's easy to see why people might be tempted to buy them as pets but we would urge them to reconsider; these animals need very specialist care and we don't believe they are suitable as pets.

She added: "I expect this little guy is an escaped pet or has been abandoned locally before turning up on this man's balcony. Unfortunately, we do see these sorts of animals being abandoned from time-to-time when their owners realise how difficult it is to meet their needs in a household environment.

"They are nocturnal animals who need to be allowed to sleep during the day and to be awake and active at night. They must be fed an appropriate diet and be provided with UVB light in captivity, to prevent metabolic bone disease.

"They are arboreal, meaning they spend their lives up in the trees, and can glide for 50m or more, which would be extremely difficult to provide for in a typical home. They're also incredibly sociable so should never be kept on their own, and can live for over 10 years."

The needs of exotic animals can be challenging to meet by members of the public because they are fundamentally linked to certain behaviours, diets or environmental conditions that can be difficult to replicate in a home. As a result we believe that there are some species, like sugar gliders, which are never suitable to be kept as pets, as it is not possible to meet their needs in a typical household environment.

This glider has been moved to a specialist keeper in Cambridgeshire with experience of keeping these animals.

We would encourage anyone thinking of getting an exotic pet to find out as much as possible about the animal's needs and whether they're the right pet for them.