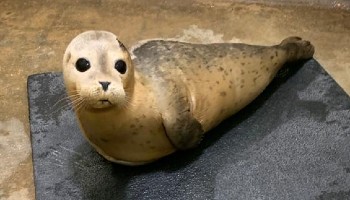 The centre is currently caring for a staggering 49 common seal pups, who will need weeks, if not months, of specialist care to help them get strong enough to return back to the wild.

Many of the pups have respiratory problems and staff at the centre have found that their make-shift saunas offer a huge amount of relief to the pup's breathing when used.

The seals with respiratory problems get their cubicles steamed twice a day to help them breathe easier.

We had previously used veterinary equipment in the past, but it just wasn't strong enough to steam the whole room. So we put our thinking caps on and got creative and made our own mobile sauna unit out of a wallpaper steamer. It even has a timer and it's on a trolley so it can be wheeled from one cubicle to another. It's been modified a bit by us - we place a hose through a hole in the wall into their isolation cubicle, switch it on and the steam fills their room.

We have found it makes a real difference to the seals breathing (just like a sauna can help us) after they have had a few sessions with the steamer!

Receiving a range of specialist care

As well as the sauna respite the pups who have been admitted to the centre since the start of June, are all receiving a range of specialist intensive care from dedicated staff at the centre.

The steaming is actually just a tiny part of the care we provide to help these poor seals. We're caring for some really sick seal pups at the moment and most will require weeks, if not months, of specialist care.

It's heartbreaking to see how poorly they are and their illness has been from a whole range of things including dehydration, emaciation,  peritonitis, septicaemia, wounds, lungworm and esophageal impaction, all which requires very intense nursing including antibiotics, and medicines especially for those with respiratory problems.

As well as this, the 16 seal pups in our isolation unit also require three hourly feeds.They're just so weak and dejected and literally fighting each day to survive.

It really is so upsetting to see these beautiful creatures all hunched up and  - their usually bright eyes are now just so dull.

Our team works so hard to give these seals a chance, their care takes a long time and they require intensive and very careful nursing.

It's important that the public never approach seals

The centre is currently caring for:

We're warning that it's important that the public never approach seals and keep any dogs well away and on a lead, as these are wild animals and can have a nasty bite.

It's not unusual for seal pups to be left alone for short periods of time so if you spot a youngster who looks fit and healthy, it's best to monitor them from a safe distance for 24 hours to ensure a parent returns. An unhealthy seal pup looks thin (but not bony) and has a visible neck, like a dog. If the mother doesn't return within 24 hours or you think the pup is sick or injured, or the seal pup is on a busy public beach, please call our emergency line on 0300 1234 999.

Please never try and return the seal to the water yourself.

Find out more information about what to do if you see a seal or pup on the beach alone.